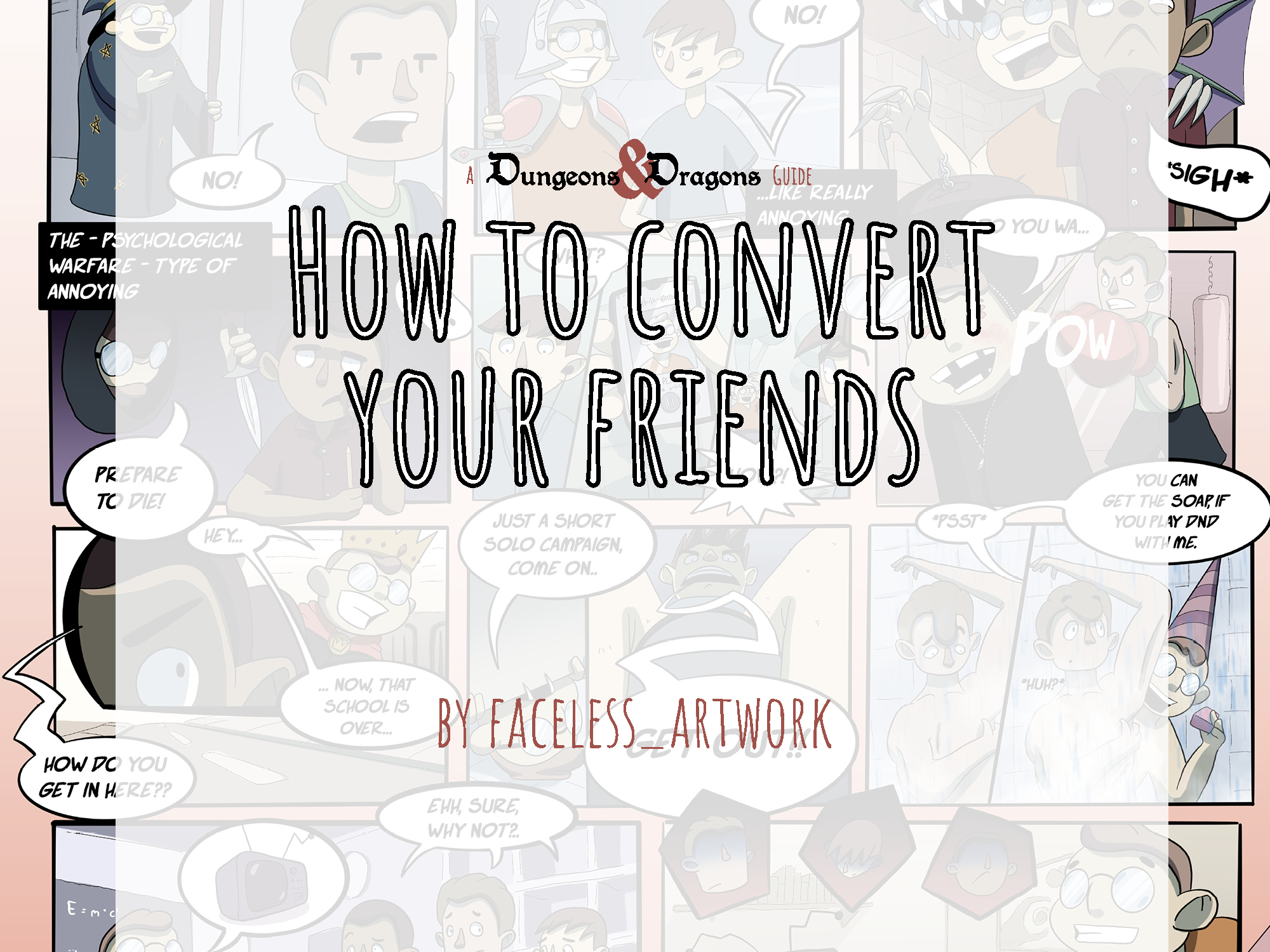 HOW TO CONVERT YOUR FRIENDS — a dungeons & dragons guide

In the KP2D „read the f*cking manuals“ (short „RTFM“), we had to choose one daily situation and design a step-by-step poster, explaining this procedure. 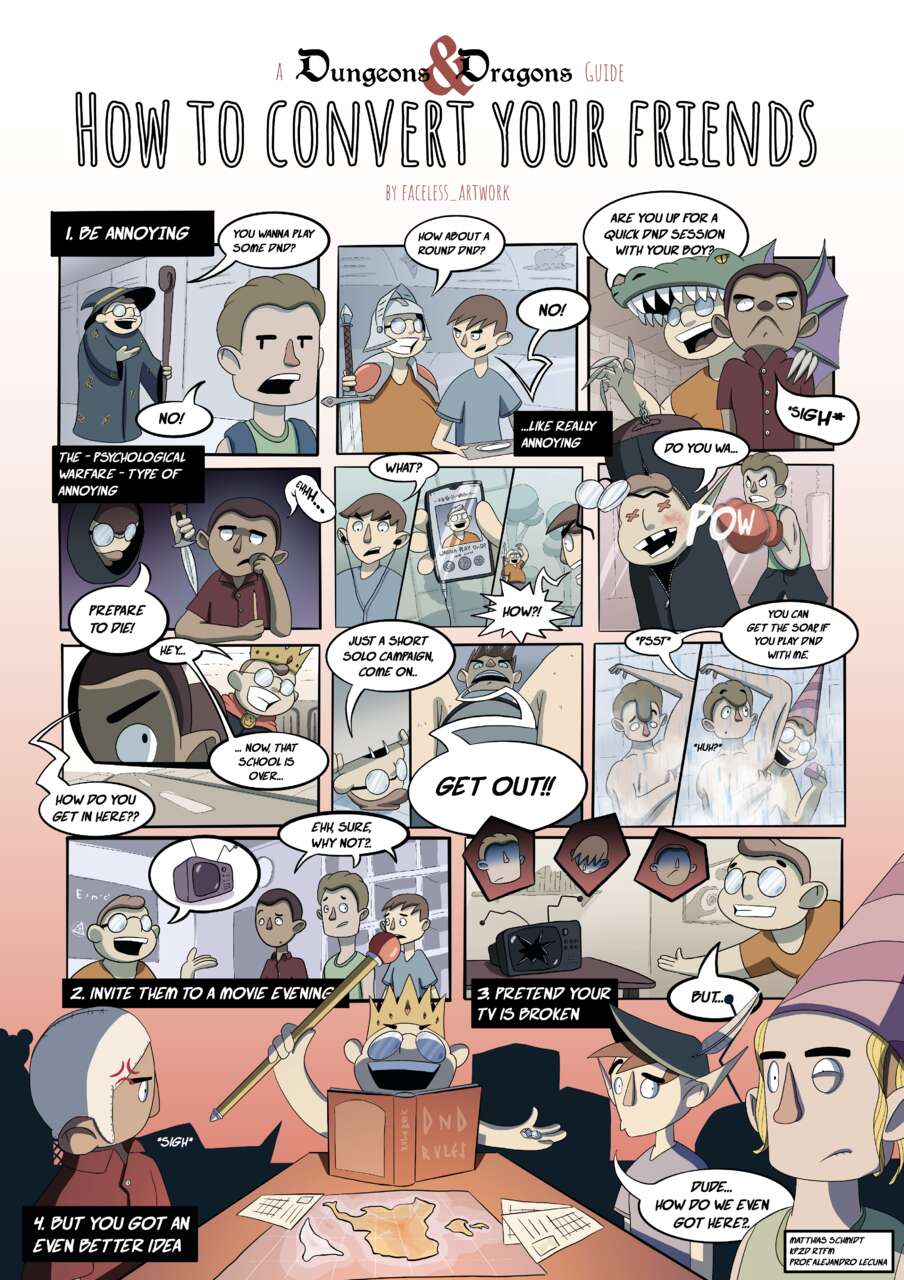 To design a step-by-step poster, i had to come up with some ideas first (obviously).

So I tackled 3 things, that interested me the most:

Because I have arachnophobia and I scream like a little baby, whenever I even smell more than 6 legs, my first idea came to be „handling spiders“. 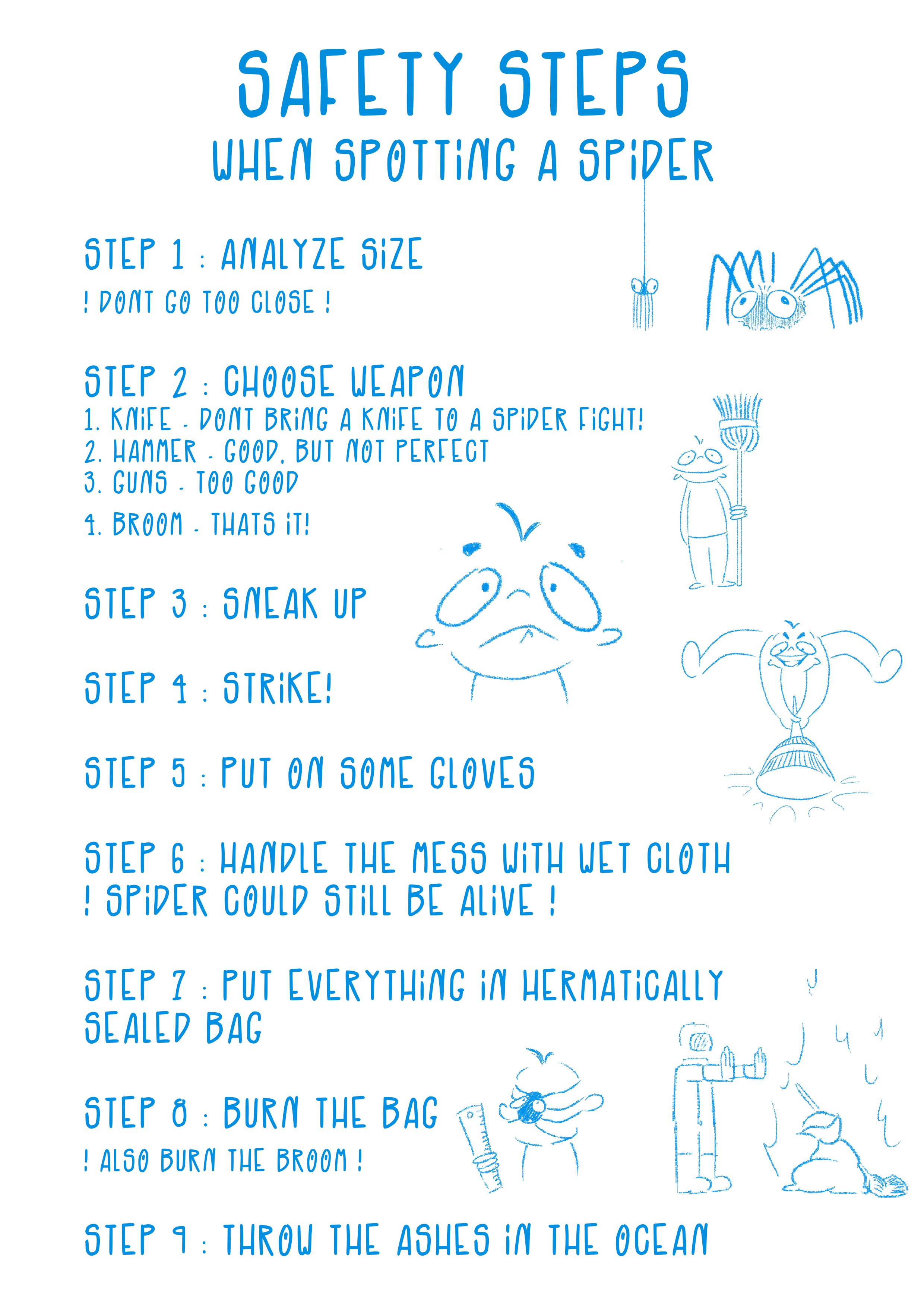 My second idea was influenced by my strong desire to play pen and paper, but not a single one of friends would like to join me, so I thought about „steps to convince your non-nerdy friends to play dungeons and dragons with you“.

(if you would like to play dungeons and dragons, message me pls!) 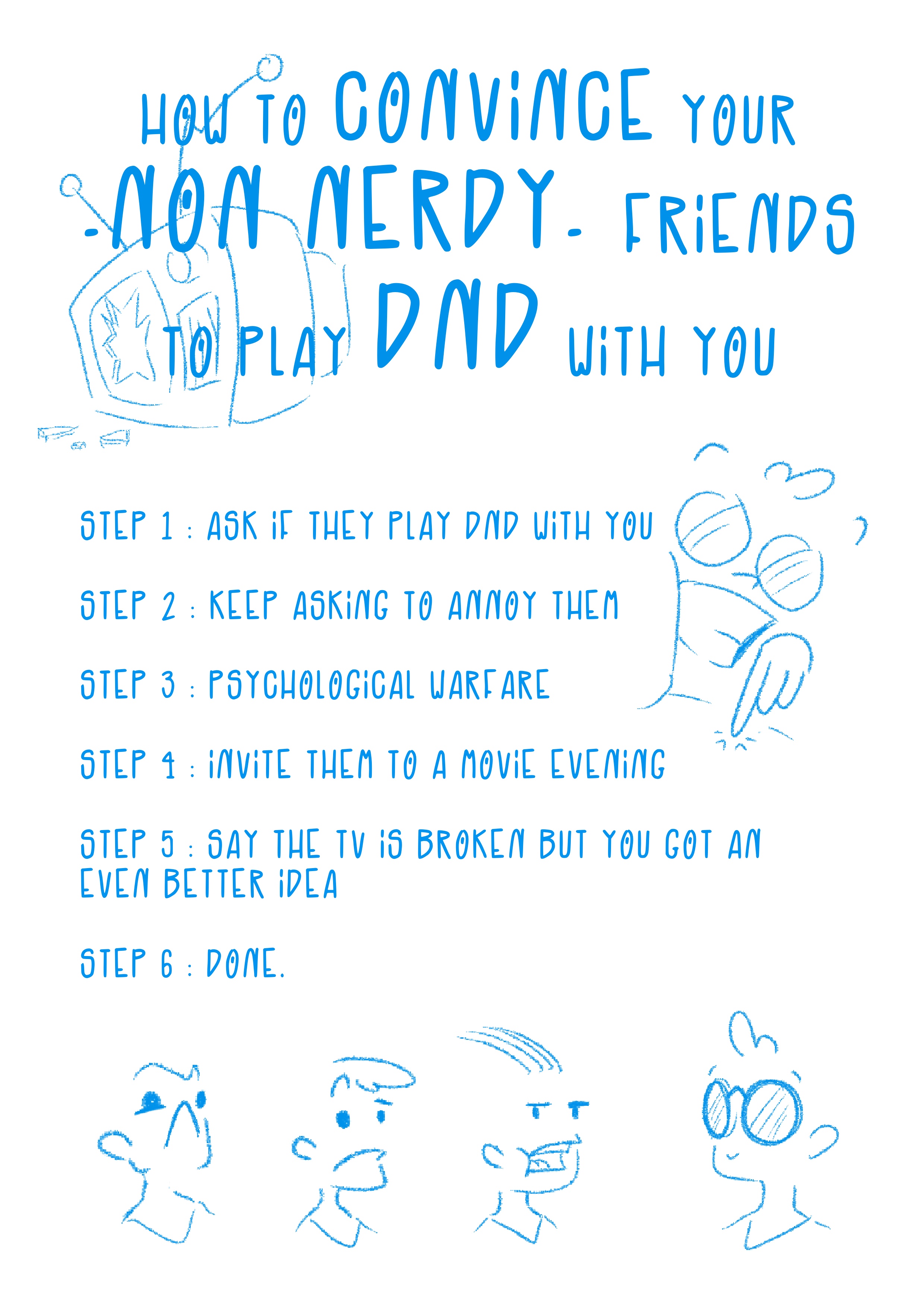 And because my favorite cartoon and series in general is „Avatar: the last airbender“, i thought about making a step-by-step instruction how to proberly waterbend.

Basically it was just a manual for doing some tai-chi forms, but I end up scratching that idea anyways, so no further details on that one, sorry. 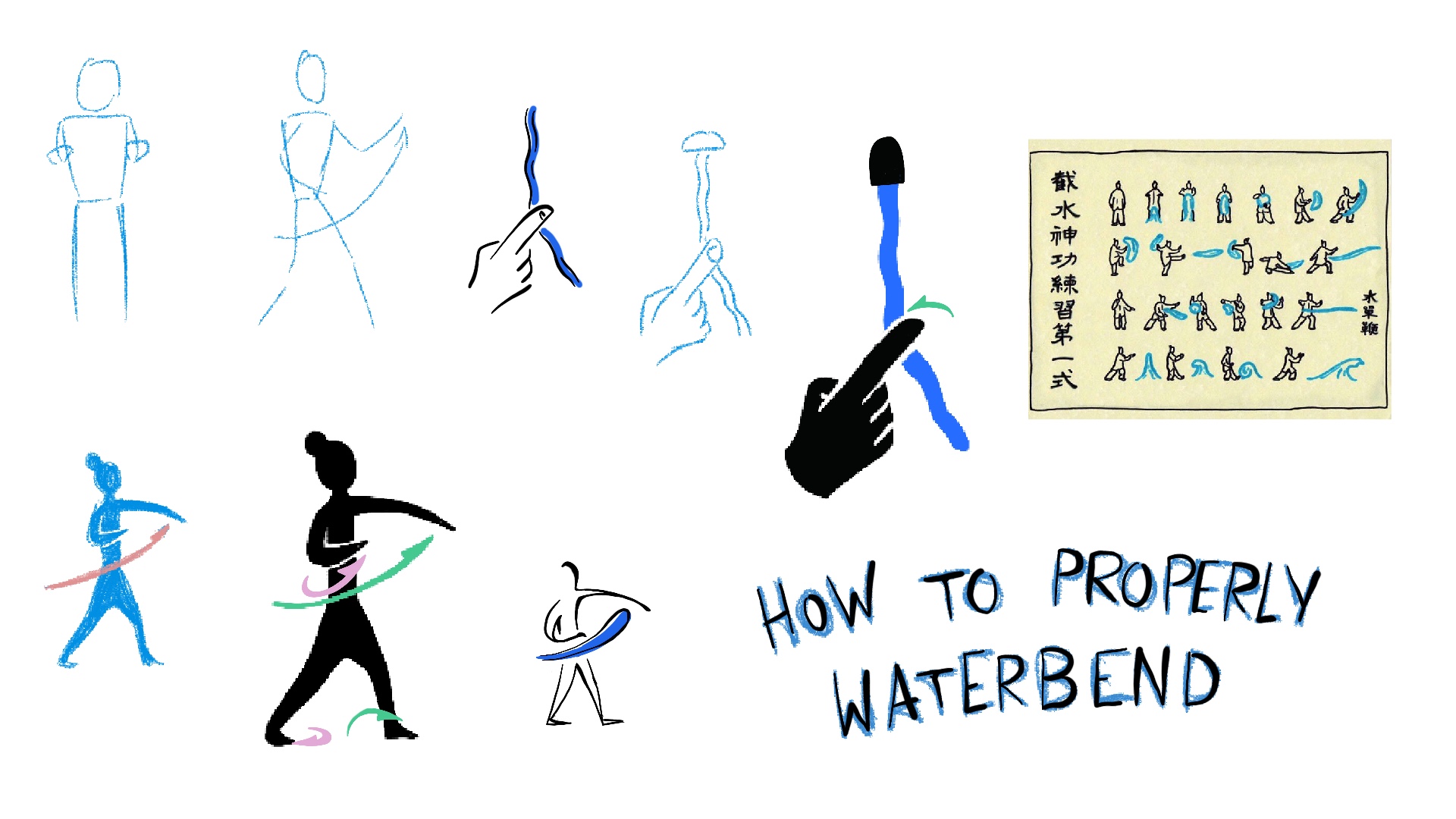 For me, it was clear, that i want to make a comic in this project. So for the next steps, I really got into the ideas and thought about steps, storyboard and characters.

For „killing spiders“ I first tried to do a very simple 2D style in black and white with some accent colors. 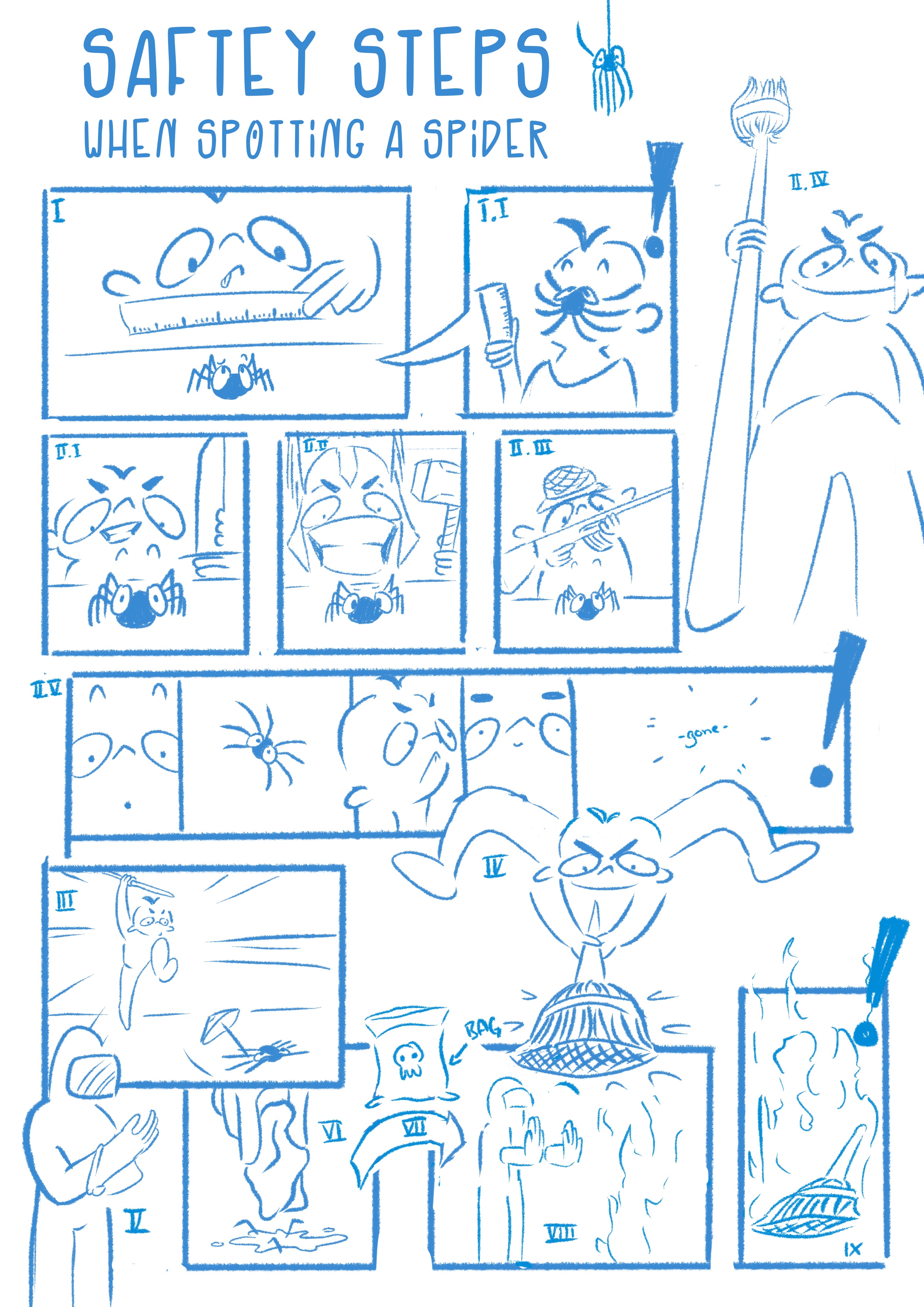 But the style doesn't really worked out that well, especially for the size requirement, which was A1 (pretty f*cking huge, to say it directly).

So I tried another style, because I haven't any other stuff to do and transformed the 2D characters in - what our professor likes to call - 2D and a half. Basically I gave them more dimension by drawing them in perspective and add some panel breaks (when the character breaks out of the comic frame).

I add color to the background and a layer of cell shading to the characters. 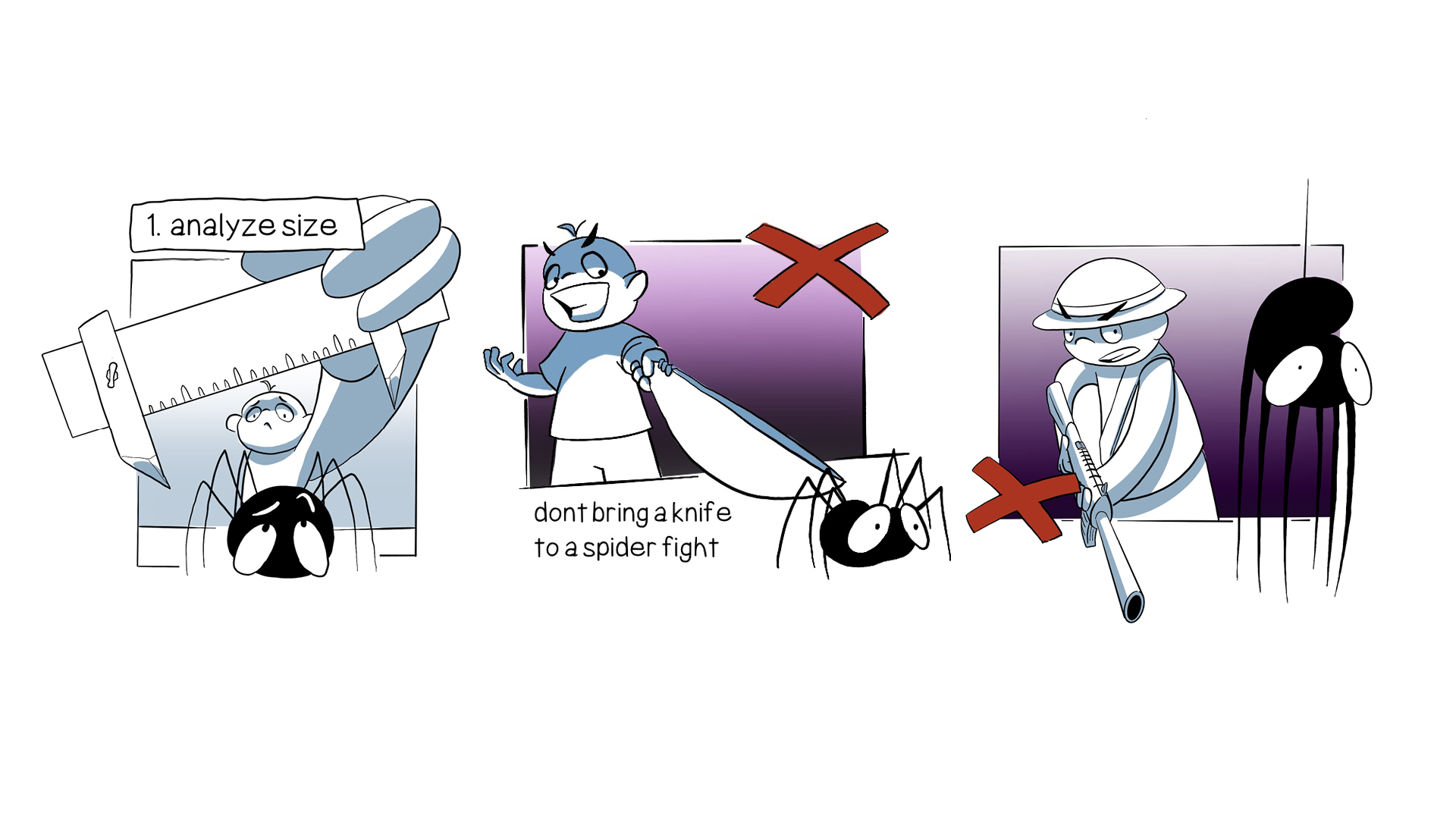 For the second idea, which was the pen and paper story (in case you forgot), requiret a bit more preparation.

I gave them some special features, like head shape, clothes and accessories and developed a unique character for each one of them. The nerd, the athlete, the swot and the cool one. 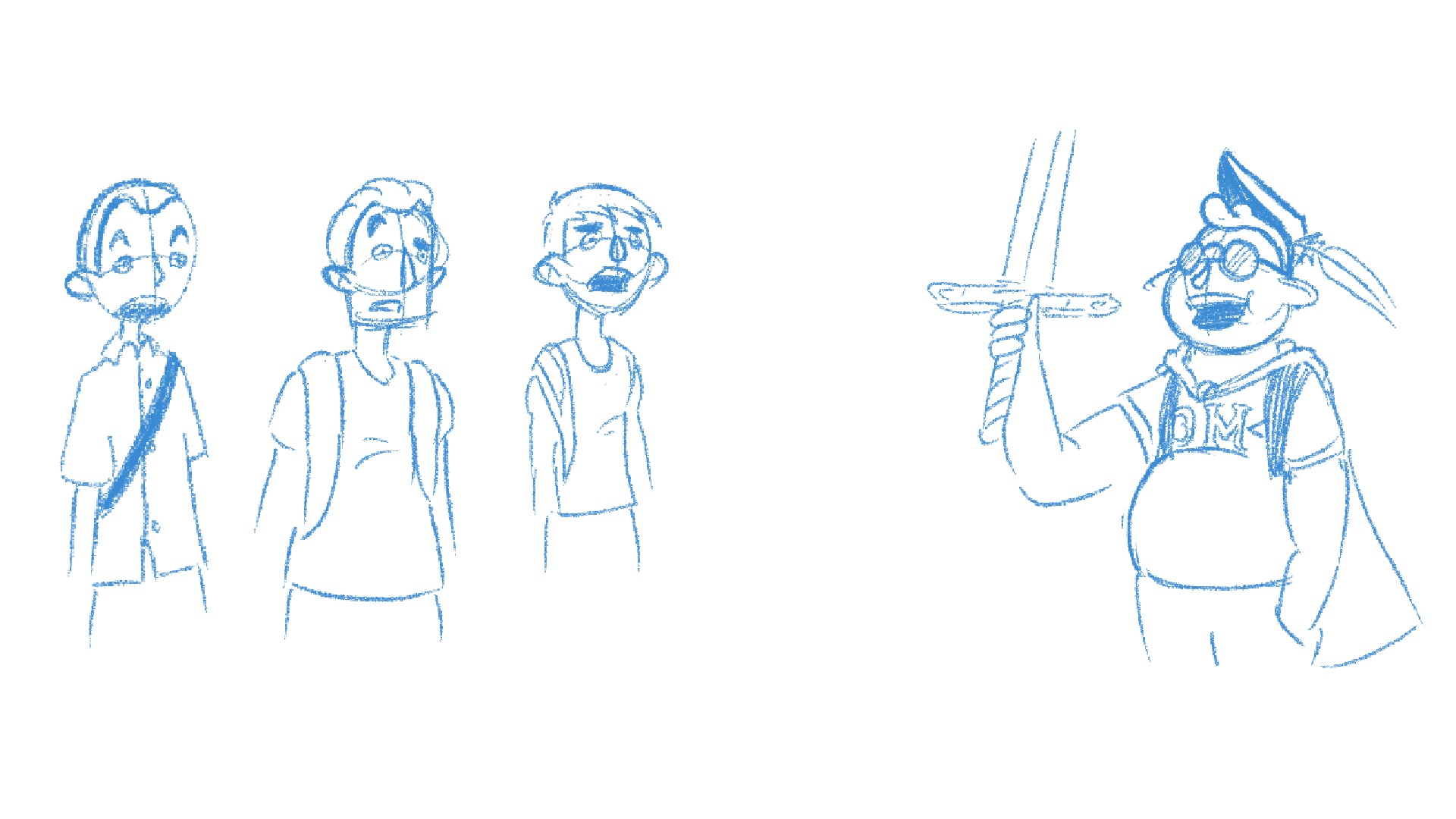 Then I played around with a classic comic style and added different types of coloring.

- only coloring a layer of cell shading (very fast)

- add flat, rough colors to the important things in the frame (quick)

(Warning: sarcasm) Because I don't like stress and wanted to get done with the projects, i decided to go with a straight up full color A1 comic page. Great! 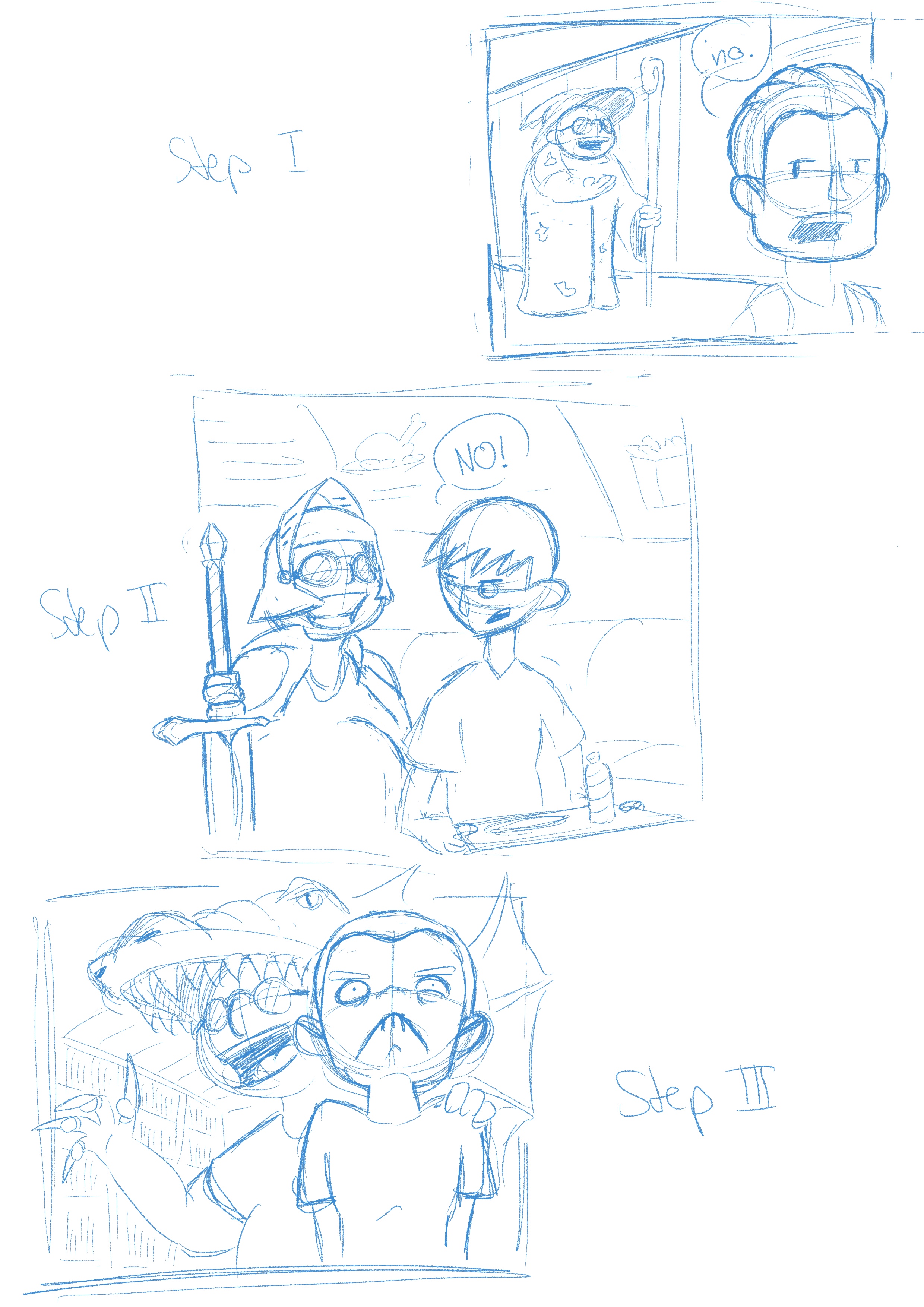 I was aware, that it was impossible for me, to do both posters in time, considering how long it will take me, to do a full color comic page. So i put the „killing spiders“ idea in the freezer - maybe I will get back to it and post it on my instagram; link is in the project description. ;)

But where do I start? I needed a foundation for my panels, it all has to fit together at the end, in a size I haven't done a comic ever before and probably never will do it again.

So I sketched a storyboard with panel- and poster layout on an A4 format and scaled it up. 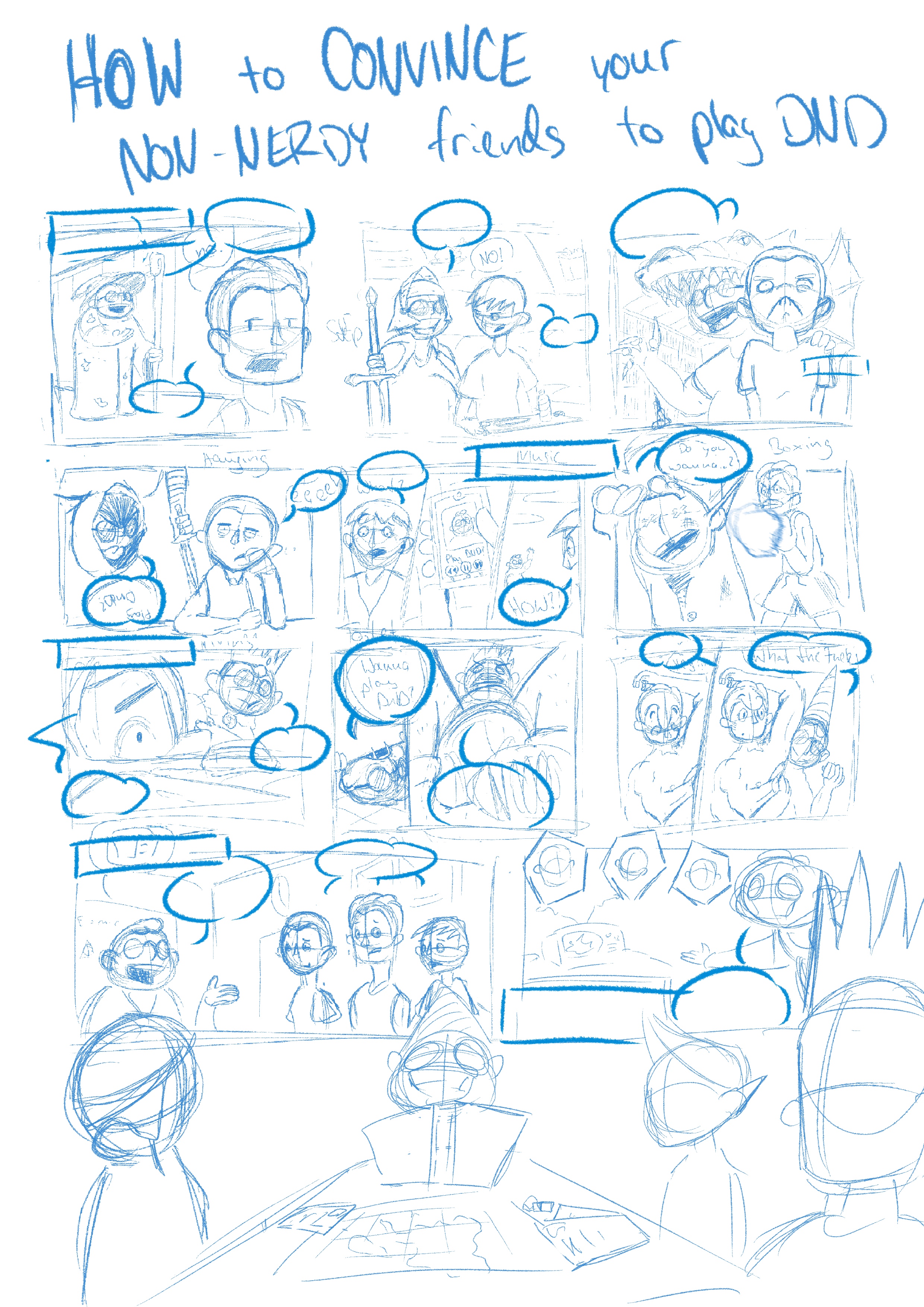 Now, some long nights began. Because my drawing program (ProCreate) wont support this size in 300dpi, I had to draw every single panel on an extra canvas.

After finishing it, I exported it into InDesign and put everything together. I composed a headline, using Illustrator and added text to the speechbubbles. 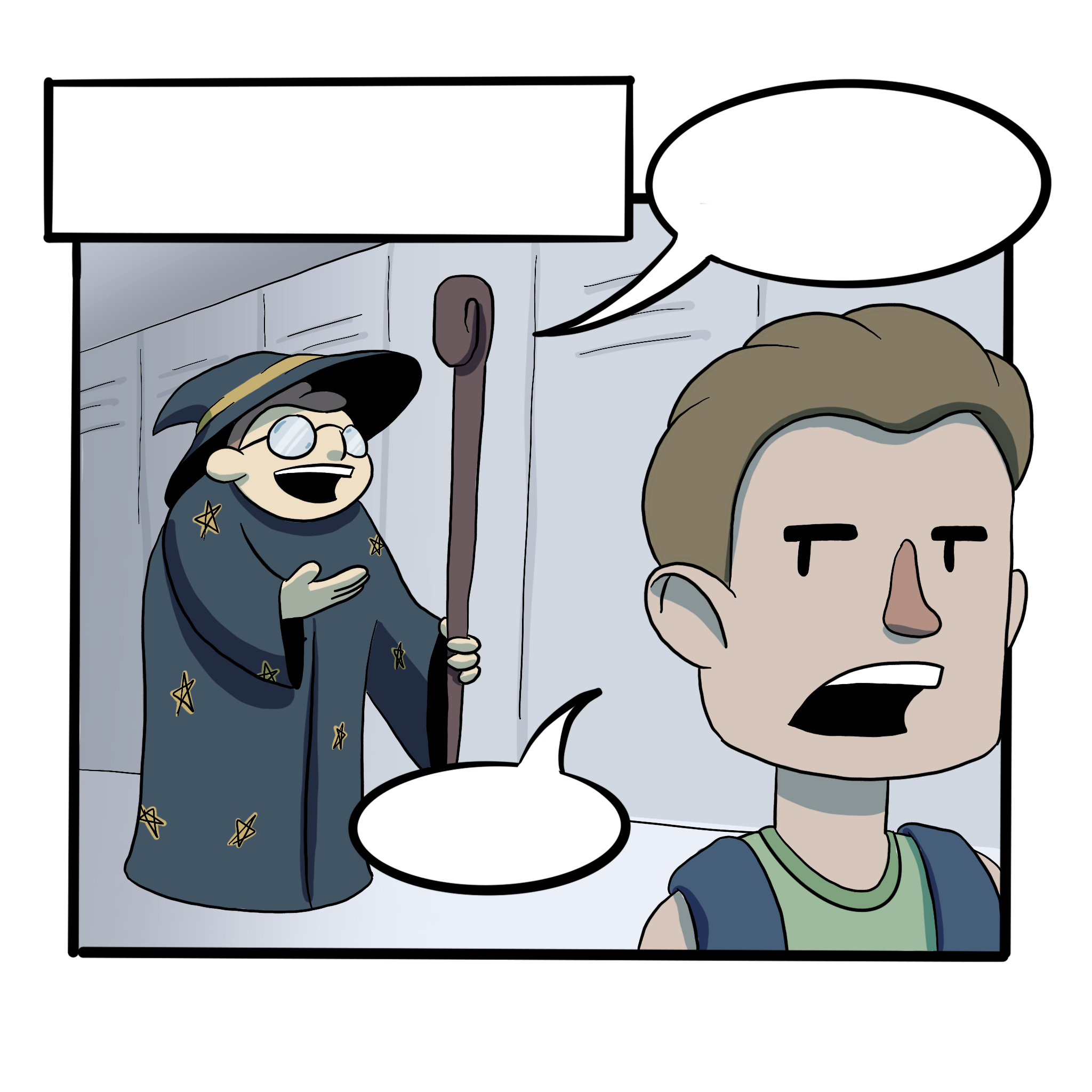 At the end i fixed some light issues, played around with different background colors, changed the headline once in a while and surprisingly got to sleep one or two hours.

And so, my poster for a step-by-step instruction on how to get your friends into pen and paper for the KP2D RTFM was done and ready to print. Feeling reliefed by finished this time consuming, but extremely fun project, I decided to put even more time in it by adding an animated narrator in the presentation video.

I think, the time and effort I put into it was totally worth it and the project were awsome two weeks.

And now, have fun with the presentation video!