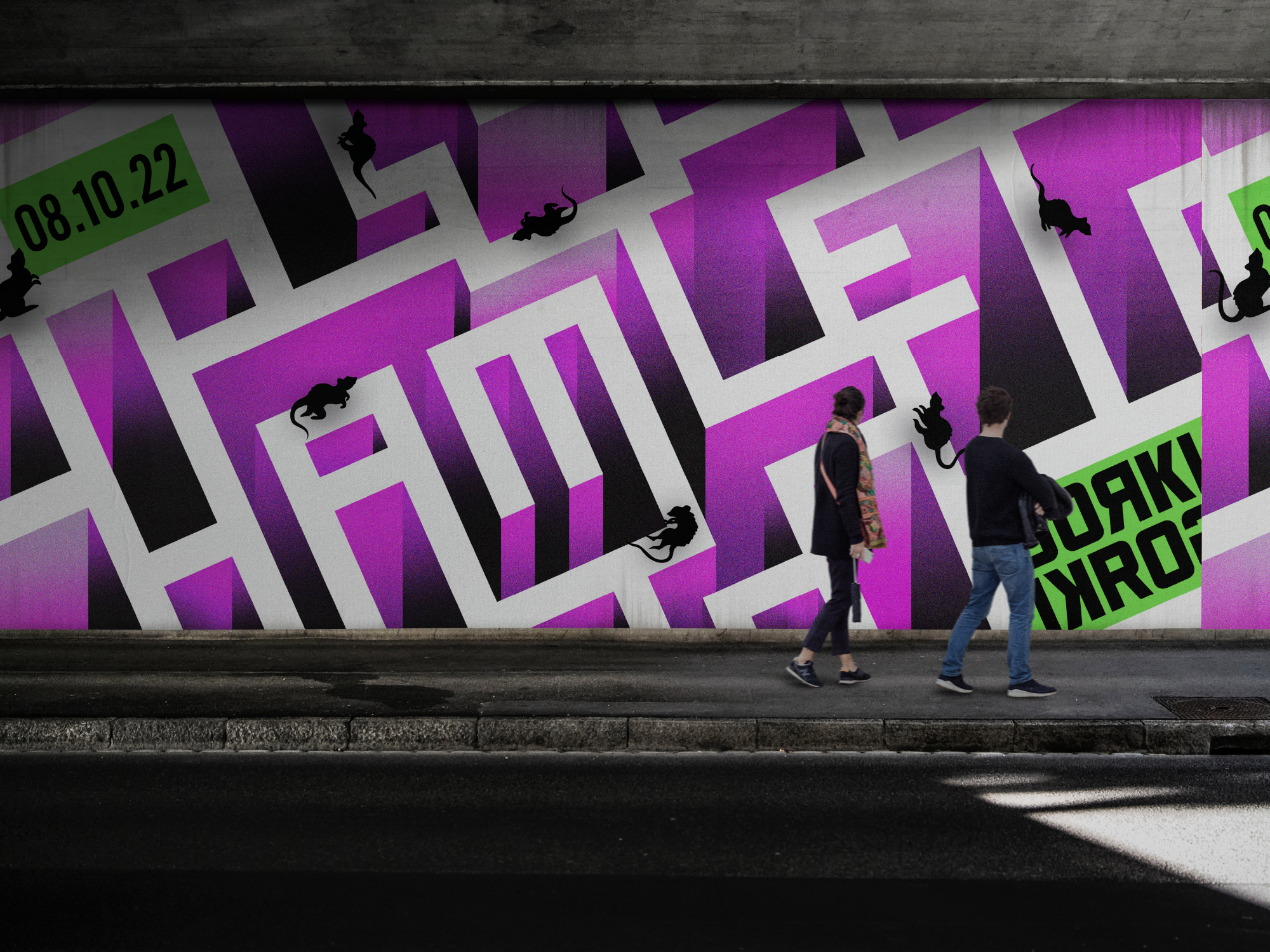 Hamlet is one of Shakespeare's most famous tragedies. The play takes place in Denmark and portrays Prince Hamlet and his revenge against his uncle Claudius, who murdered Hamlet's father to seize the throne and marry Hamlet's mother. With a story capable of "seemingly endless retelling and adaptation by others," Hamlet is considered among the most powerful and influential works of world literature. Considering these numerous adaptations, it is only logical that this play is related to a multitude of effective and breathtaking visualizations. The amount of high-quality posters is endless. Nonetheless, most breathtaking banners and posters rely on the famous leitmotif of Yorick's skull, where Hamlet famously stated in his long tirade "To be or not to be, that is the question". My challenge was to deviate from the obvious and through analyzing the hidden moral of the play to develop a unique visual identity. 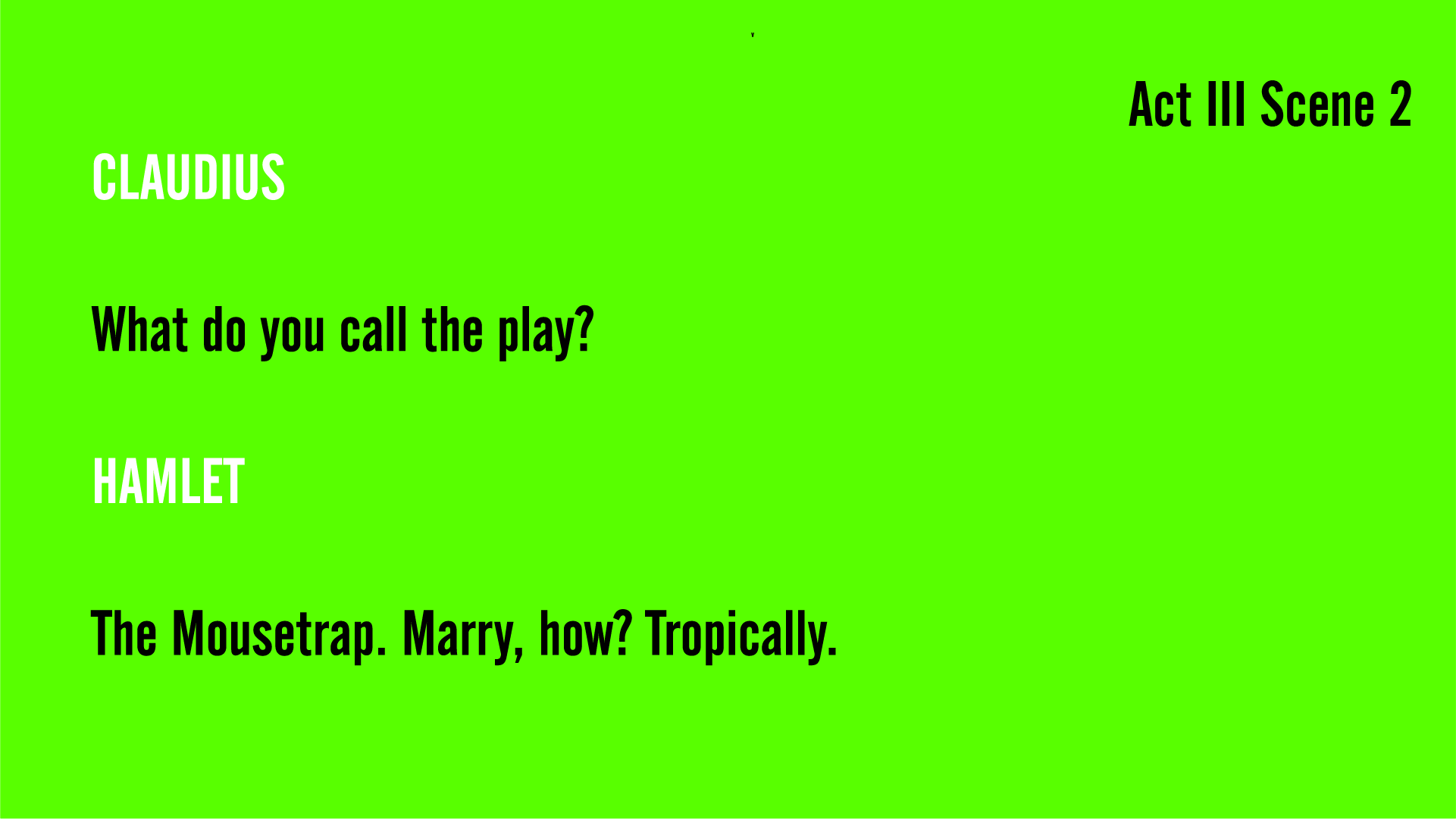 The leitmotiv or visual metaphor I decided to extend was the climactic play-within-a-play scene, The Mousetrap.
The Mousetrap is Hamlet's response to his uncle, Claudius, the king, when Claudius asks Hamlet the name of the play that Hamlet has arranged to be performed at court. Also called The Murder of Gonzago, the play is set up to depict what truly happened to Hamlet's father and thus truck Claudius by admitting his faults.

Just like the figure of speech, all the characters in Hamlet are running around in a desperate, lethal labyrinth. Tricks and ruses are used against each other. However, the most deadly labyrinth is occurring in their minds. Hamlet, for instance, an avid overthinker, cannot act up to this honorable duty to avenge his father and is stuck in the prison of his mind.
All important characters die through poison, yet their thoughts and minds have already been poisoned by their intrusive, destructive, and toxic thoughts. By attempting to help their cause, all end up harming themselves and each other. Since this is Shakespeare, in the end, everyone has to endure the inevitable deadly consequences.

These metaphors truly represent the moral essence of the play. I thus decided to use The Mousetrap as a visual catalyst to deliver an unexpected yet fundamental perspective on Hamlet. 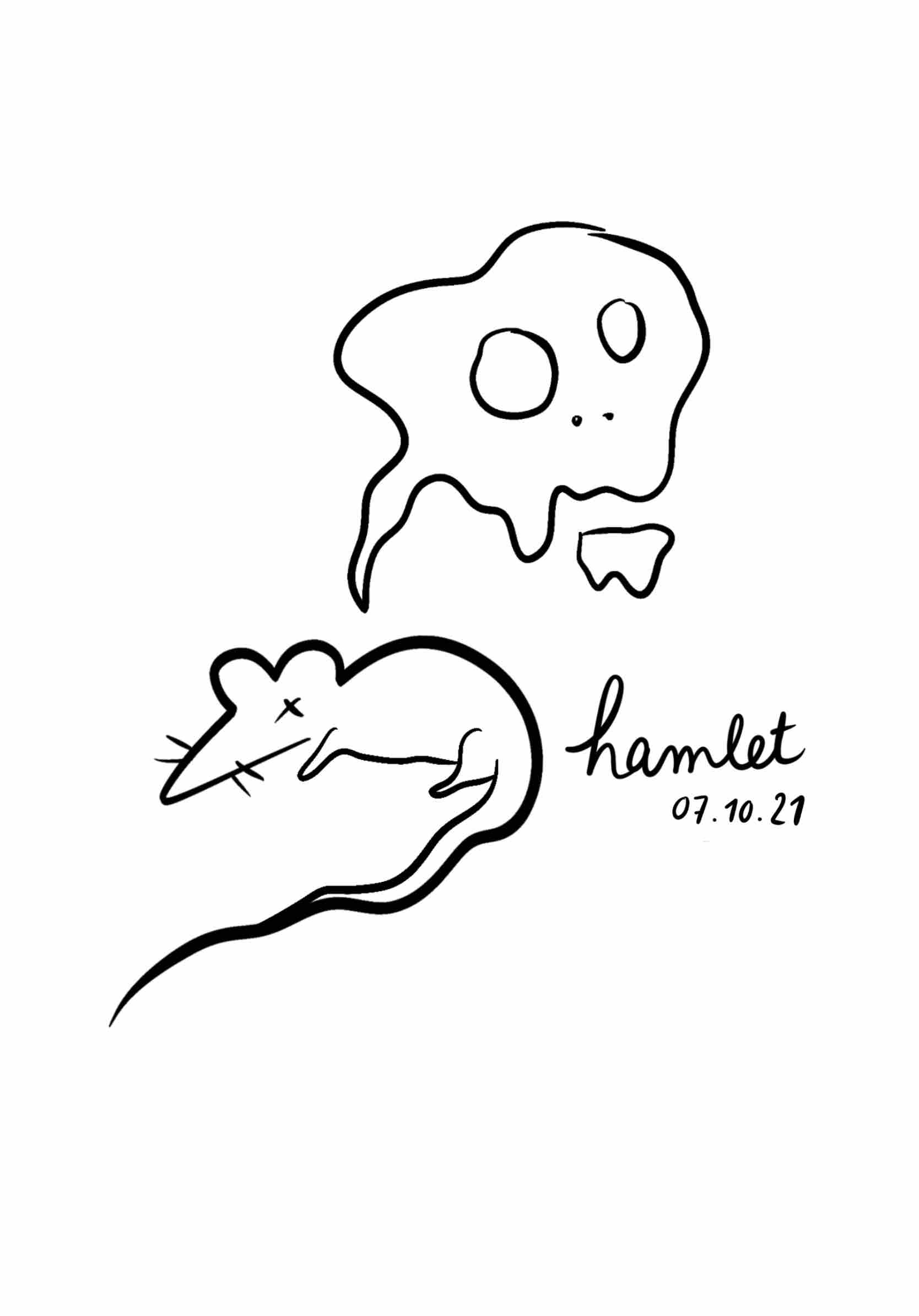 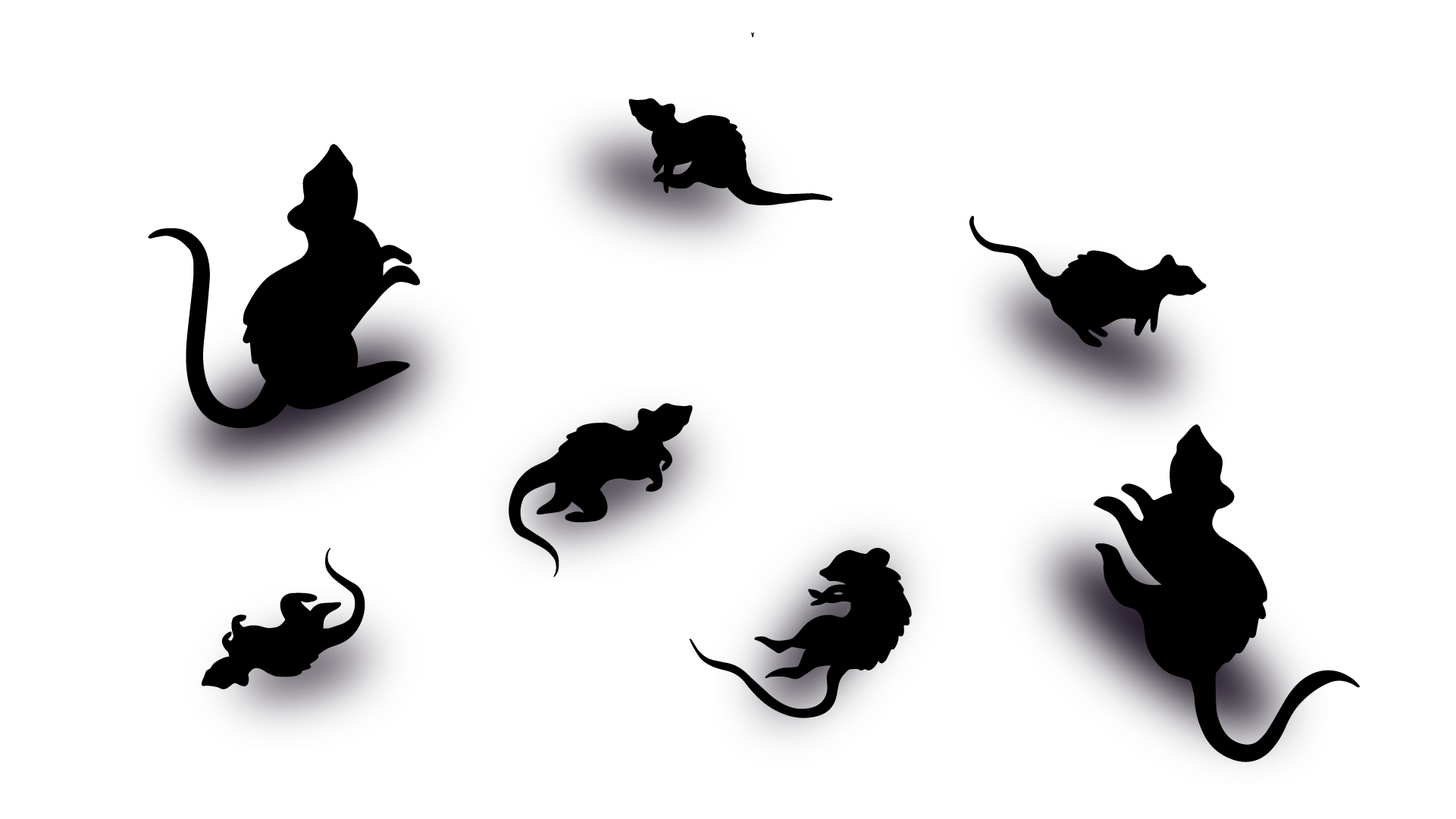 MICE
Represent the main characters in Hamlet.
The main characteristics visualized are death, curiosity and the urge to run away or perhaps towards something.
The absence of eyes underlines the lack of moral judgment most characters endure, as well as how much they are blinded by their own toxicity. 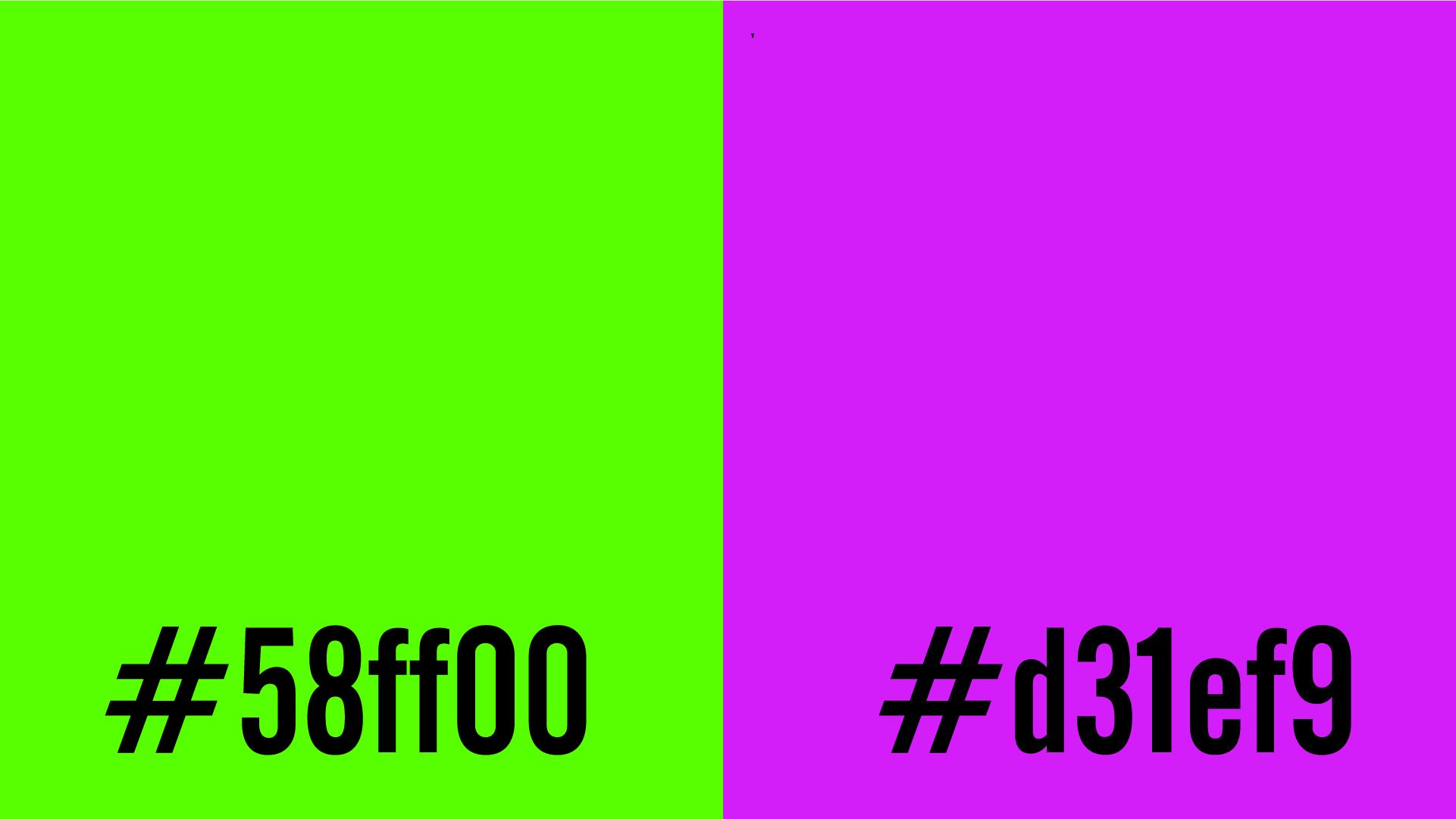 BRIGHT GREEN and PURPLE
These two colors are the most dominant in this visual take on Hamlet.
The bright, fluorescent and toxic GREEN represents the metaphorical and literal poison present in the play.
PURPLE is a traditional royal color and emphasizes the regal setting. 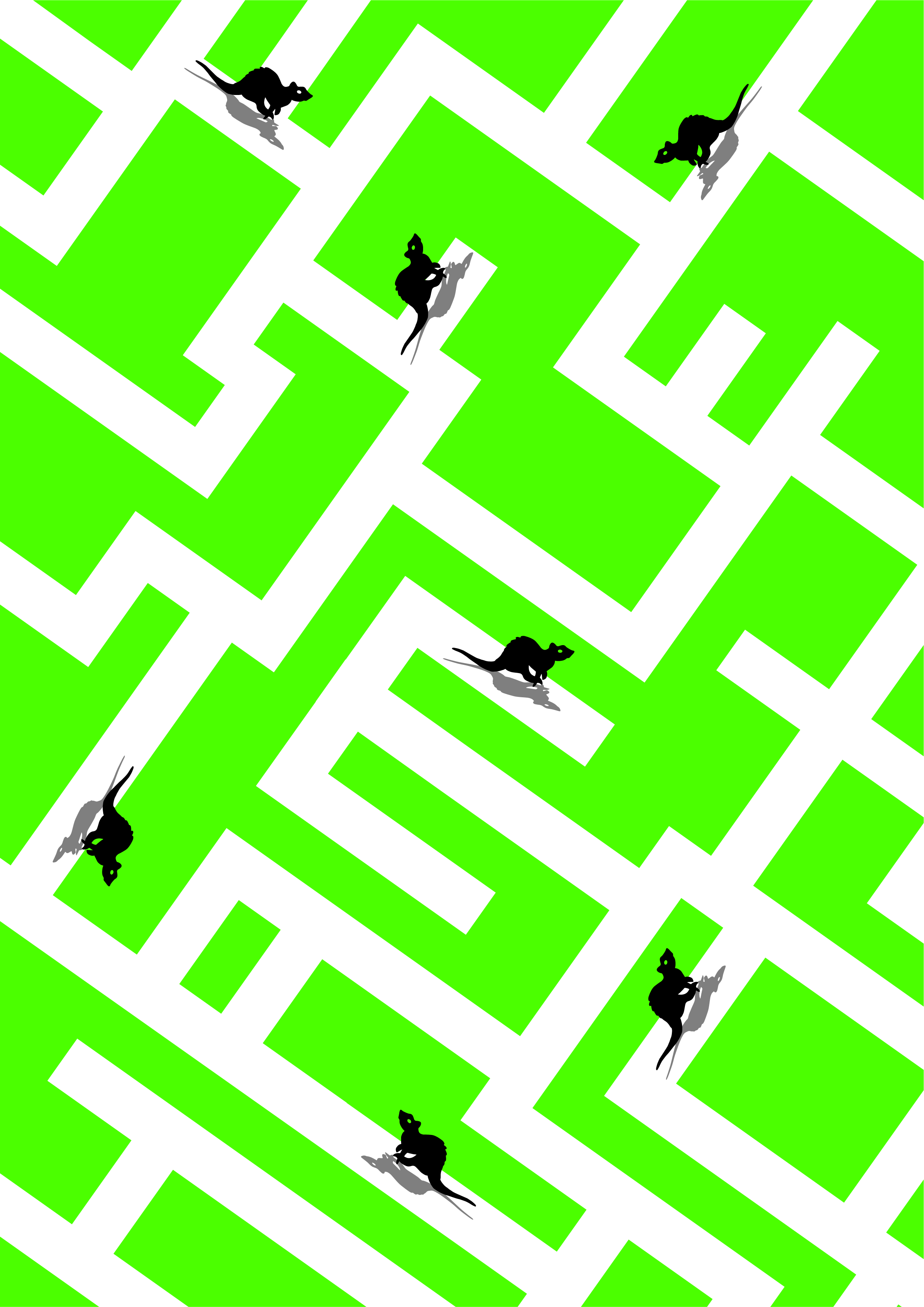 THE LABYRINTH
It seemed the appropriate poetic approach to the wording of The Mousetrap. 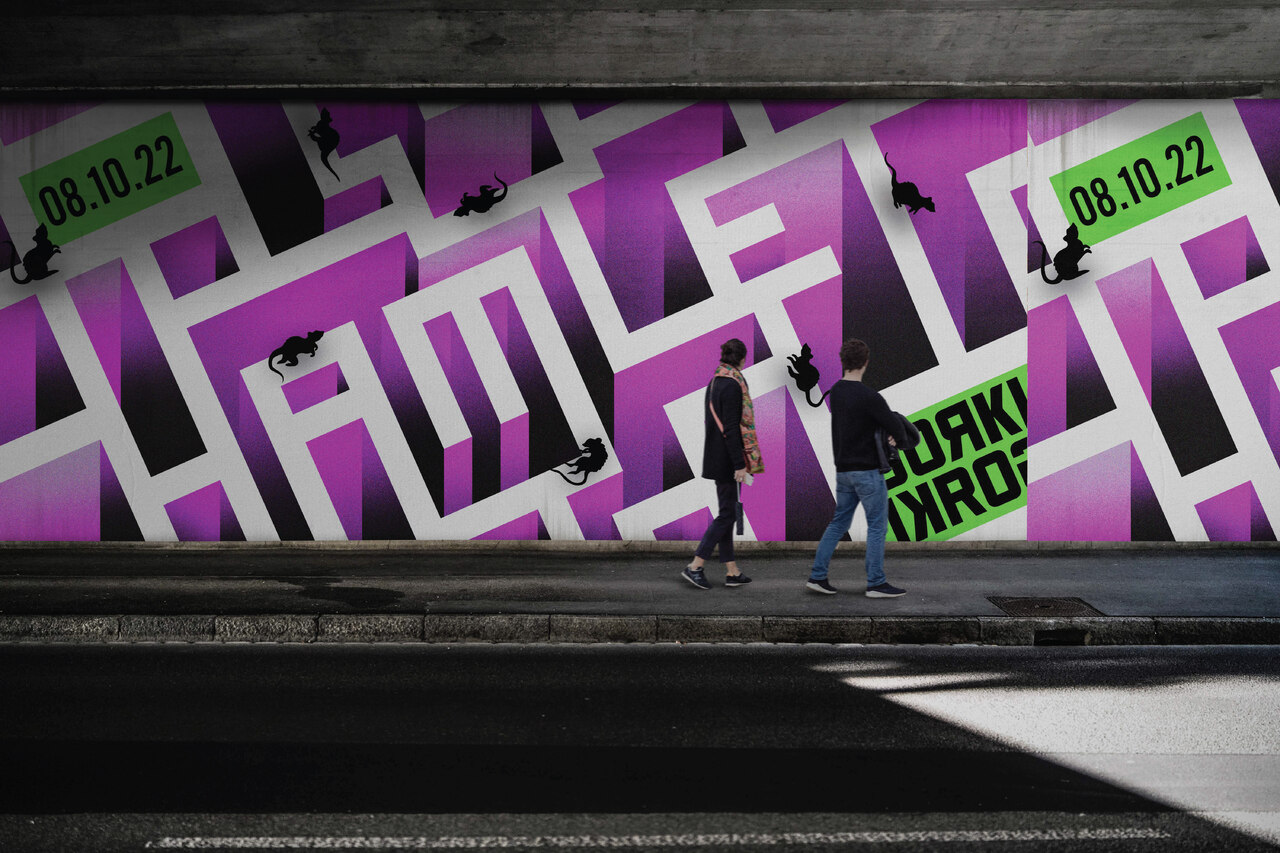 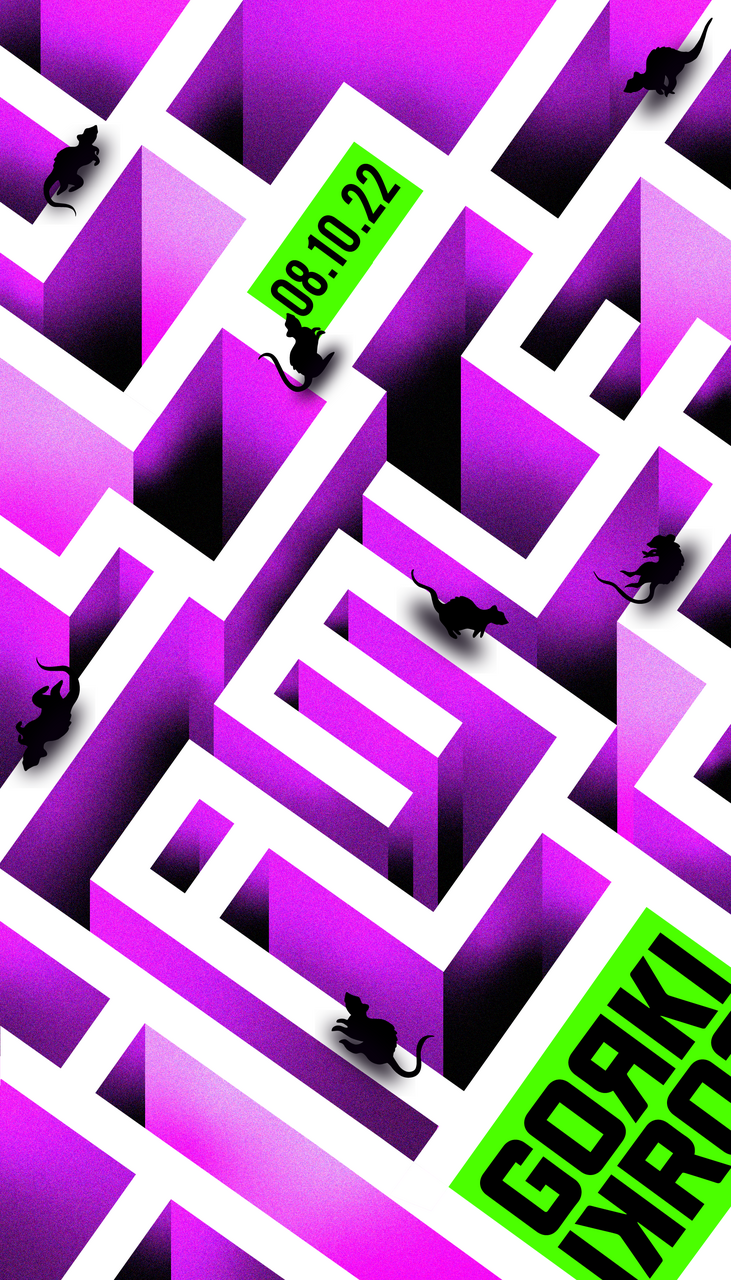 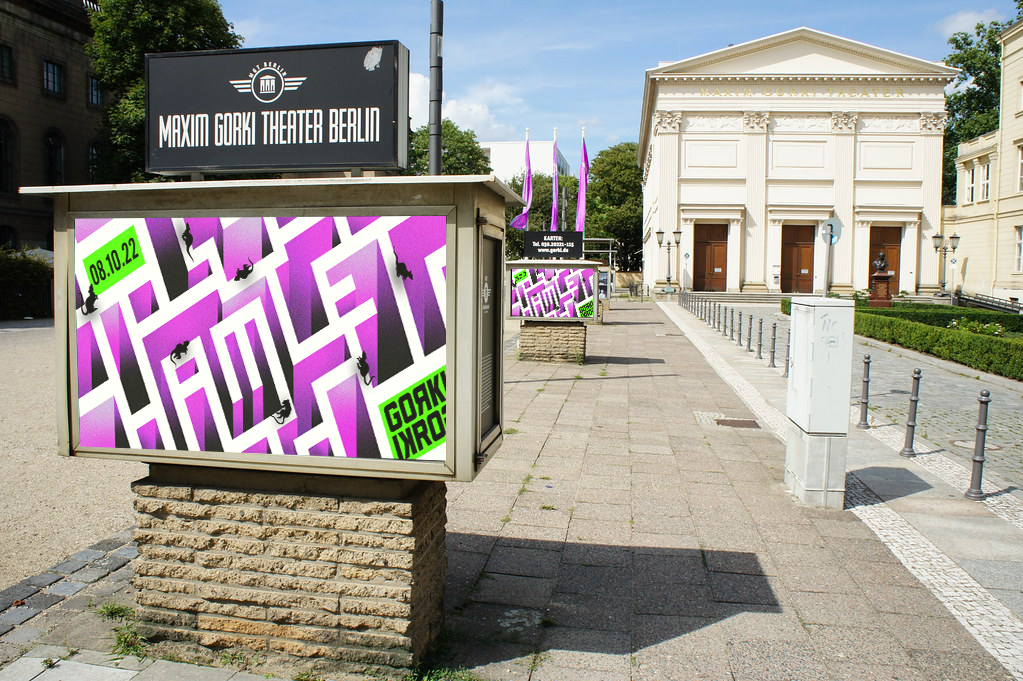