The Eloquent Void: design decisions in data physicalization about loneliness

Those who love know: it is precisely in the absence that closeness is greatest. (Alves, 2008)

Information is pervasive in society nowadays. New technologies and digital mediums have escalated and amplified access to data. But, as the competition for attention increases, emergent knowledge communication approaches like data physicalization attempt to present valid information more efficiently and memorably.

Through comparative experiments, the present design research intended to underline the impacts of strangeness in data physicalization to foster awareness regarding loneliness. The COVID-19 outbreak unleashed struggles that will likely keep on damaging our emotional and mental well-being long after the pandemic subsides. Thus, properly designed physicalizations might become an appealing means for scientific knowledge disclosure and consciousness-raising initiatives.

Design is ontological. It determines ways of being, knowing, and doing in the world. (Escobar, 2018) Having that in mind and assuming design research as “a systematic search for and acquisition of knowledge related to general human ecology” (Findeli, 2010, p.293), the current project is an attempt to tackle preferred possibilities in data communication.

Tricky contacts to quantitative data and its unappealing graphic charts might signify outreach losses to scientific and academic knowledge. In this sense, design decisions are relevant tools to transform data decoding experiences into entertaining and meaningful interactions. 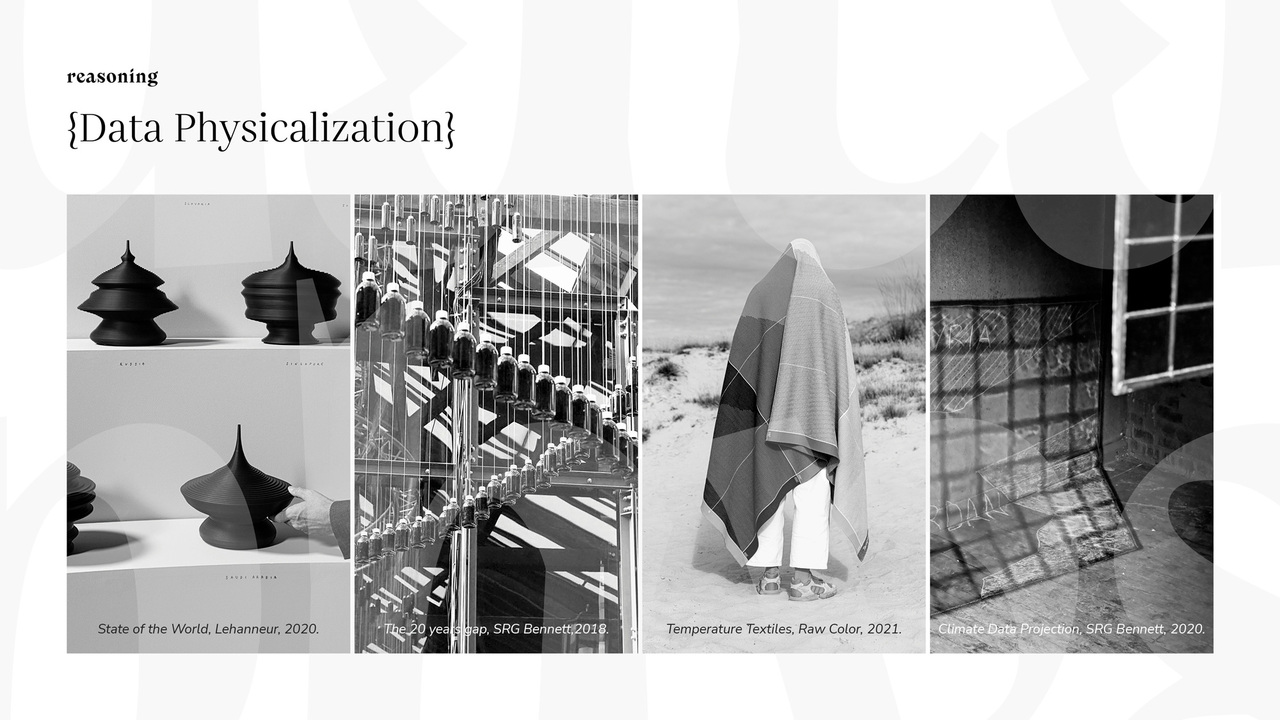 Data physicalization, the emerging field in which artifact properties like geometry and material are means for data encoding, is the focus of the present study. Since design has its own ways of knowing (Cross, 1982), this research was divided into two different milestones. The first one was held as design-led research with an expert mindset (Sanders, 2008) where, through systematic conceptualizations and prototypes, an object conveying quantitative data regarding loneliness was conceived.

The second part was research-led with a participatory mindset (quantitative/qualitative research), where four different experiments were carried out with 41 international participants. The overall objective was to verify hypotheses regarding material-weight illusions and evaluate the physicalizations’ efficiency and memorability in comparison to traditional visualizations. 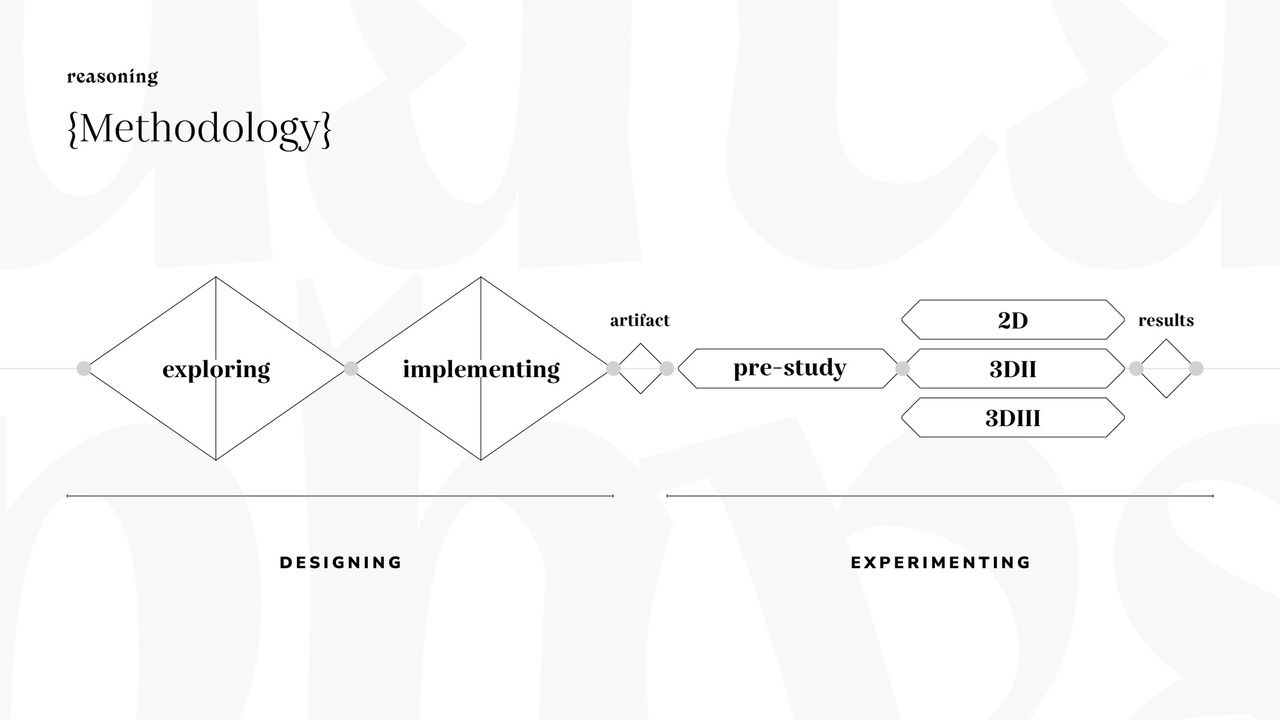 The COVID-19 pandemic triggered the arousal of several struggles worldwide. Social interactions restrictions and the overexploitation of digital information/interaction became urgent and a matter of civic duty. The relevance of these adaptations is unquestionable. However, it is also prominent to account for the ravages these new demands caused to individuals and society.

As a Latin expatriate in Germany, I have been experiencing numerous distresses that were undeniably escalated by these particular pandemic outcomes. Achotegui (2019) describes a migration picture he coined ‘migratory morning.’ According to the author, this image reflects a state of vulnerability and stress unleashed by multiple difficulties migrants face. Social exclusion, fear, helplessness, and loneliness are samples of these immigrant personal battles.

Motivated by emotional demands, I encountered extensive background theories that sustained my empirical assumptions and enabled me to glimpse the consequences of loneliness in one's health and society. Panksepp (2004) posits “social bonding ultimately involves the ability [...] to experience separation distress when isolated from social support systems and to experience neurochemically mediated comfort when social contacts are reestablished.” (p.274) This means that all of us, in more or less intention, experience physical and emotional discomfort when deprived of social contact. 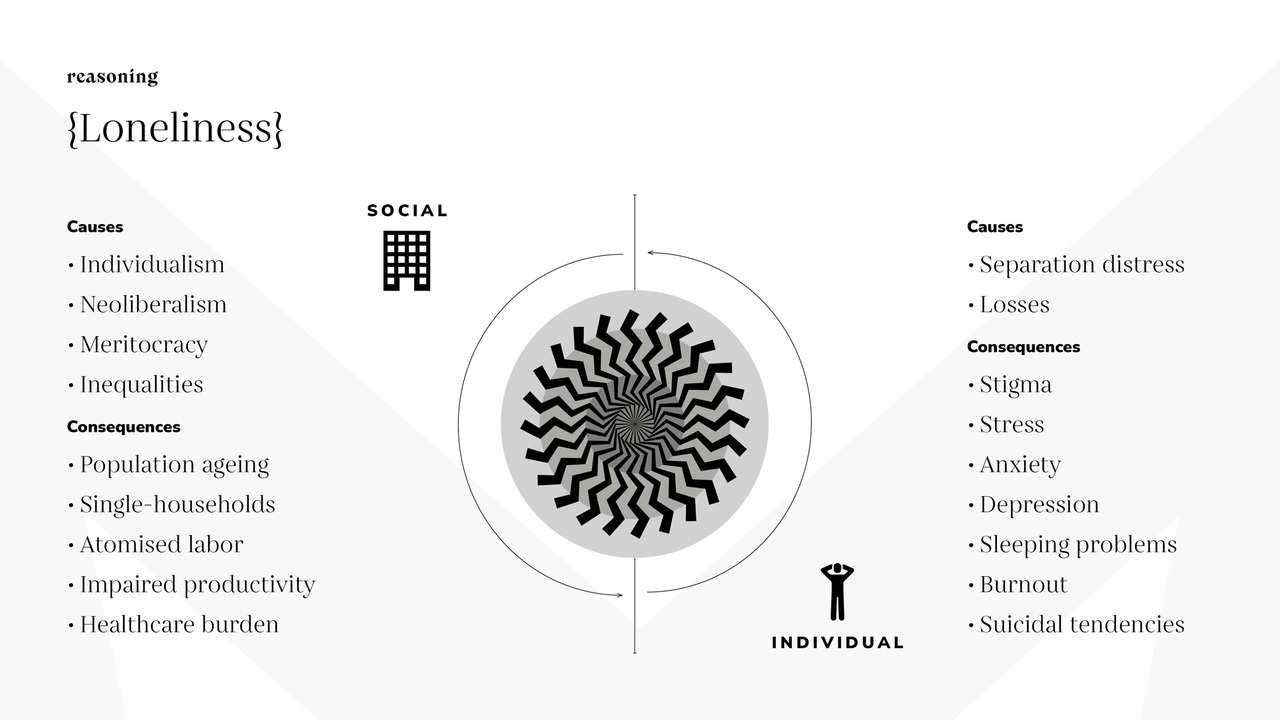 Learning and knowledge building requires “both a grasp or figurative representation of experience and some transformation of that representation. [...] The simple perception of the experience is not sufficient for learning; something must be done with it.” (Kolb, 1983, p.252) Acknowledging that, the current study addressed the design role in meaningful interactions with data physicalization.

Assuming that information recall indicates sense-making, verifying the effectiveness of weight strangeness in memorability could be relevant for enhancing people's consciousness and leveraging new public discussions. Therefore, carrying out this research through design (Frayling, 1993), the present work outcomes arouse from the following queries: 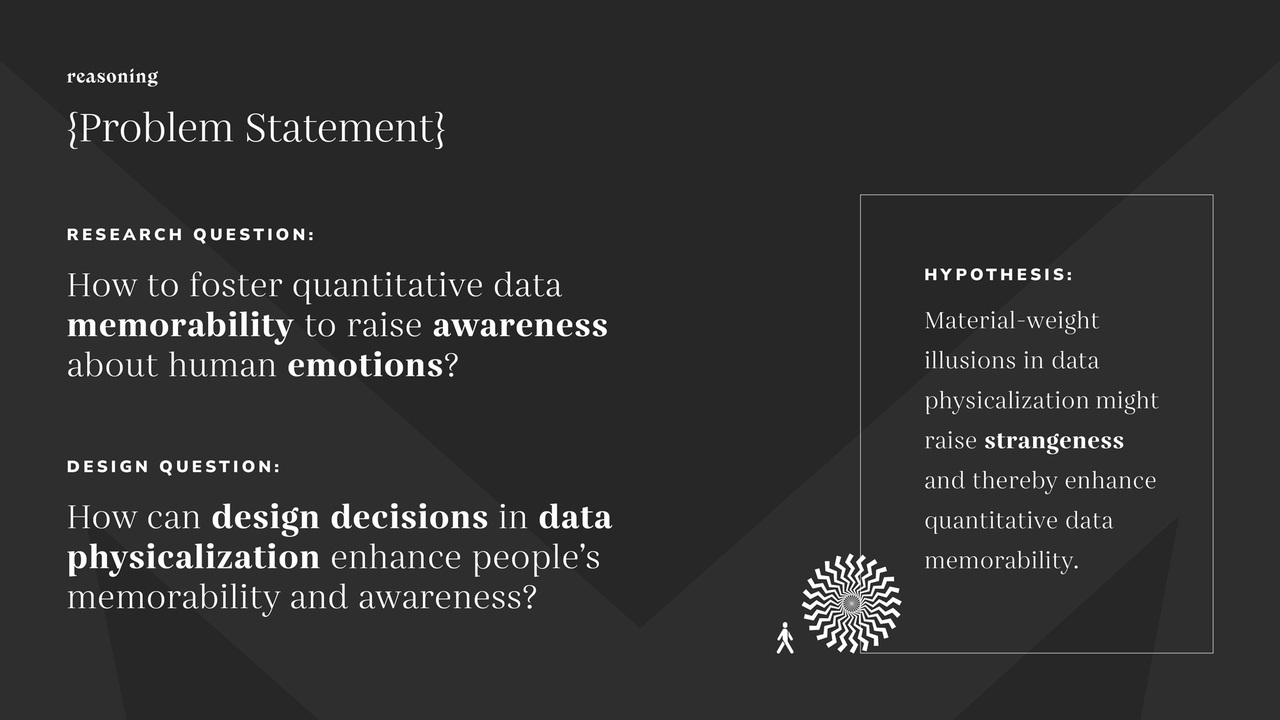 As mentioned previously, the current design project was divided into two different stages. The first was practice-based (design-led) and carried out through systematic conceptualizations and prototypes. The methodological model applied to this primary milestone was conceived by Bela Banathy in 1996. The method was then popularized under the term ‘double-diamond.’ In a nutshell, it consists of repetitive divergence/convergence, analysis/synthesis processes. (Dubberly, 2004)

For each ‘diamond,’ “we first diverge as we create a number of alternatives […], and then converge as we evaluate the alternatives and select the most promising and most desirable alternative.” (Dubberly, 2004, p.24). The first ‘diamond’ of the design process was documented as ‘The Exploration.’ This initial chapter's section introduces the physicalization's foundational concepts, references, and datasets. 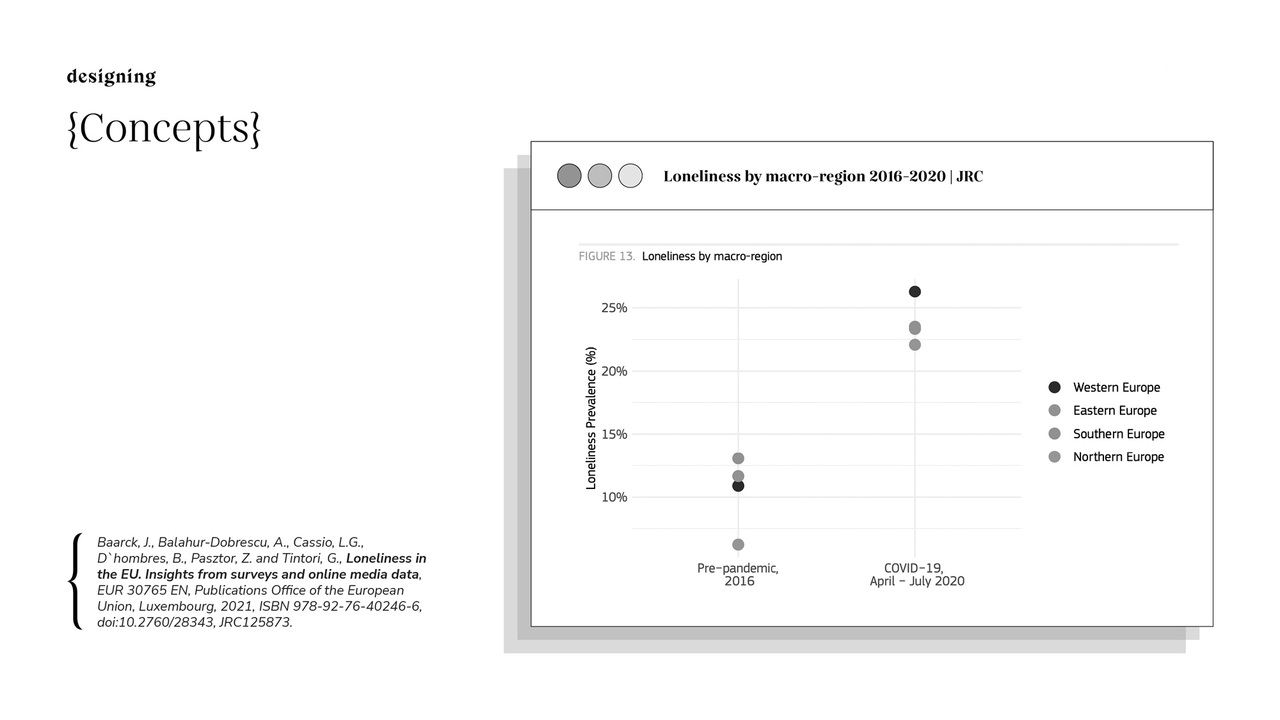 The second chapter's part, subsequently, was documented as ‘The Implementation,’ and it contains the divergent/convergent prototypes' dynamics and meaningful findings. 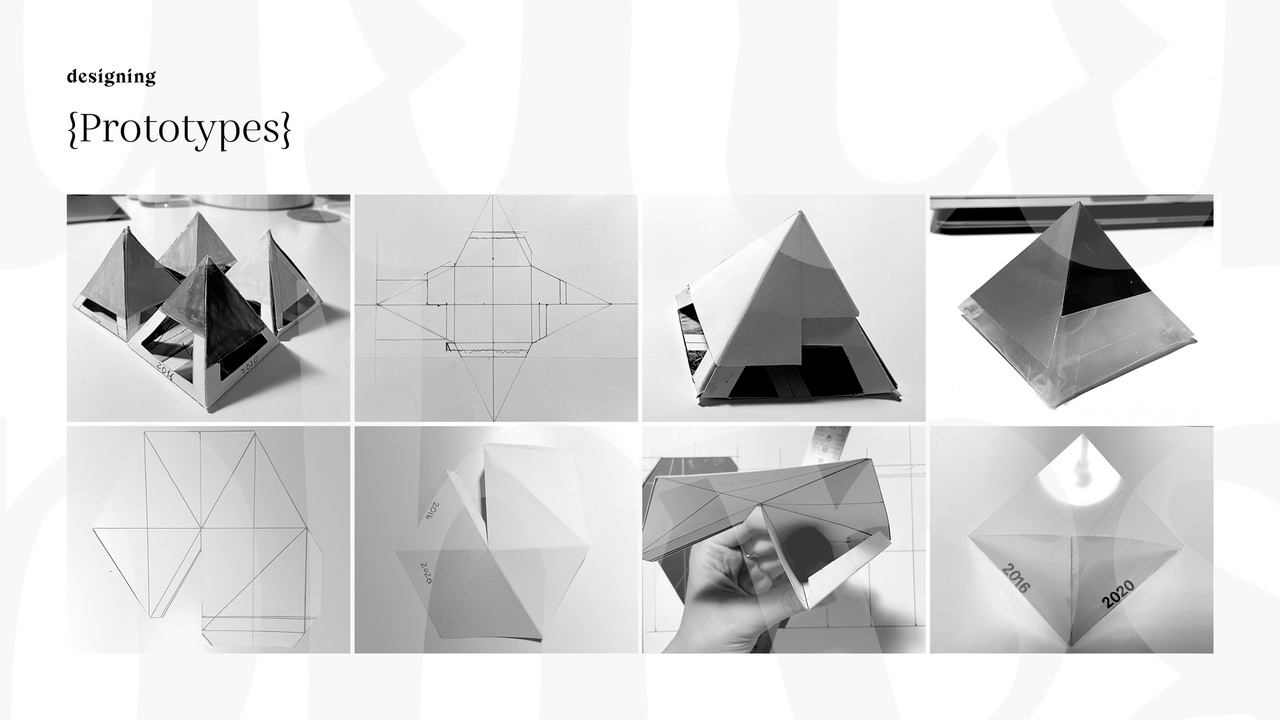 Finally, the last section from this chapter, ‘The Artifact,’ presents the final physicalization solution. It also describes the reasoning behind the design decisions, the production of the object, and the limitations faced on the way. 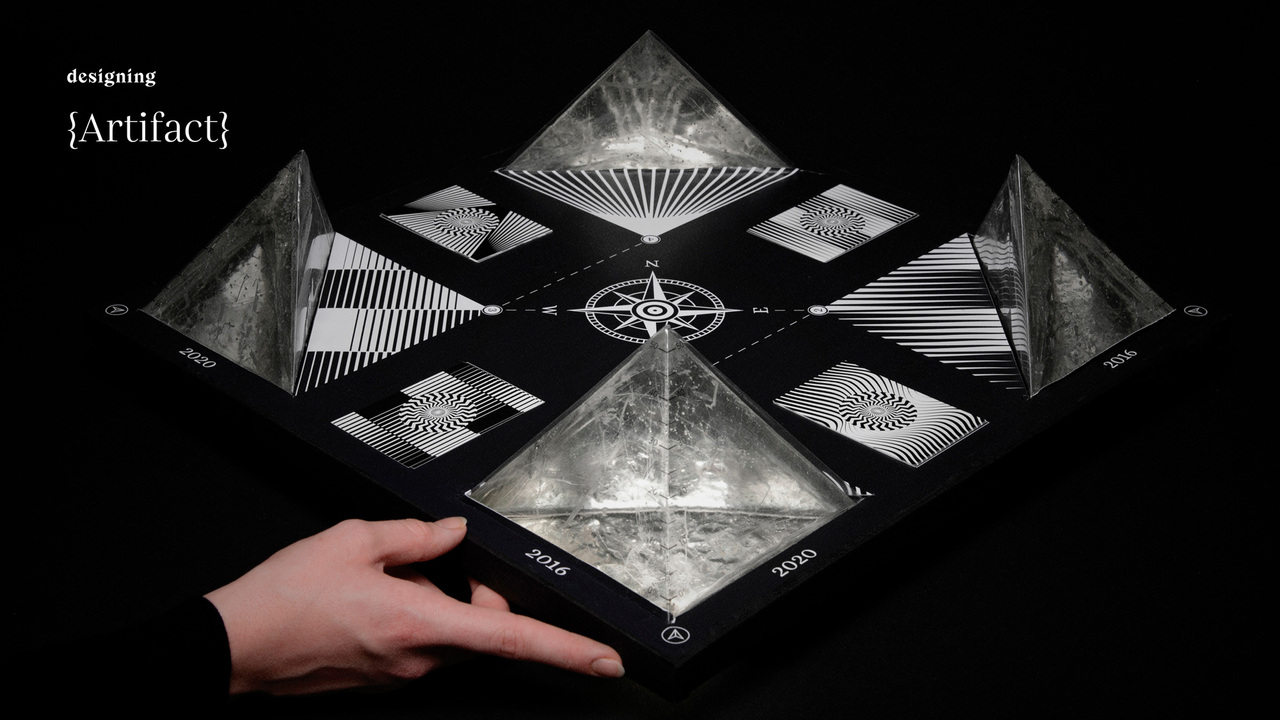 Based on the literature review and metaphorical distances criteria previously settled, the project's aesthetic decisions were leading to more abstract solutions. In this sense, proceeding with less literal patterns would match the overall physicalization visual identity.

As the macro-regions are inherently diverse, it was challenging to find graphic elements and patterns to represent them. According to Baarck et al. (2021), Eastern Europe includes “Bulgaria, the Czech Republic, Croatia, Estonia, Hungary, Lithuania, Latvia, Romania, Poland, Slovenia, and Slovakia.” (p.30) Apart from the previous contact with communism there is no aspect gathering all these plural countries.

This lack of common identity among the macro-regions countries ratified the pursuit for non-literal elements to resemble them. As the definition of ‘Eastern’ seems to be ‘the opposite of Western,’ the logic behind the patterns became: 1) Southern: sand waves; 2) Eastern: forest trees; 3) Western: city buildings; and 4) ice peaks.

The numeric indications on the board encode the navigation order (Southern, Eastern, Western, and Northern) and the time-range data (years). The resin half pyramids represent the emptiness of loneliness and its stigmatization. “Although many of us experience loneliness at one time or another, it is often overlooked or dismissed. Because our society prides itself on self-reliance, loneliness might carry a stigma for people who admit to it.” (Griffin, 2010, p.3)

Loneliness leads to a self-perceived feeling of social failure, which prevents people from openly talking (or even thinking) about it. This reluctance to publicly acknowledge our vulnerabilities transform loneliness into an invisible (or transparent) and dangerous problem. Which also justifies the sharpness of the half pyramids' shapes. These heavy and transparent pieces encode the percentage scales and contextualize the data when the upper parts are assembled.

For the gameplay/experiment instructions, a notebook and video were designed. The initial textual content was submitted to users to underline possible improvements regarding clarity before the implementation. After analyzing the feedback, a few wording and paragraph sequences required minimal adjustments. As the timeline was strict, the instructional video and notebook were straightforward.

The second stage of the current design research, as already pointed out, aimed to verify hypotheses and compare data physicalization to visualization. The experiments would investigate whether strangeness regarding material/weight could leverage physicalizations efficiency and memorability. Thus, four different studies were conducted with 41 international participants aged between 22 and 65 years old.

According to Muratovski (2016), “[t]here is always a benefit in using multiple sources of evidence when conducting research. This process of cross-referencing your research is called triangulation. This way of working can help you establish credible, valid, and reliable research practice.” (p.39) Having that in mind, the present multimethod research triangulated three different tools to mitigate possible bias and increase rigor. To collect all the experiments' data, the methodological tools were: surveys (questionnaires), observations, and audio recordings. 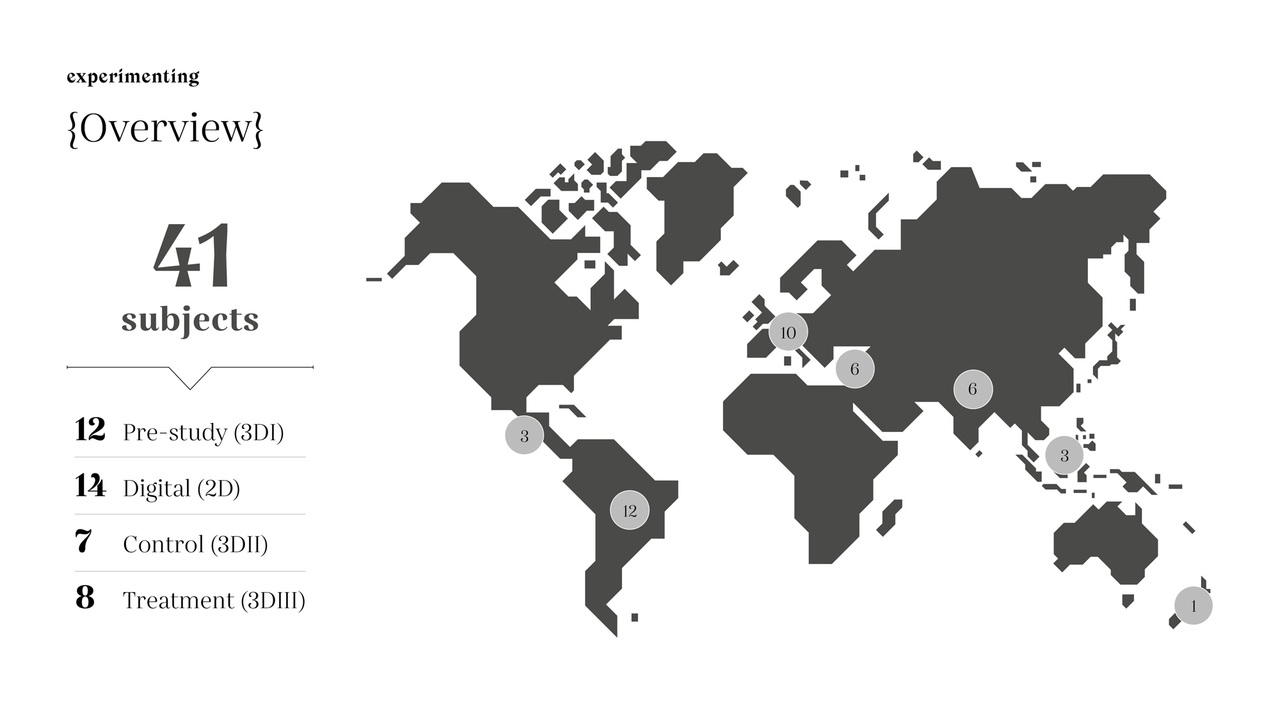 The original research proposal predicted only three experiments with different treatments. The first study (3DI) would be carried out physically, and the mountains' upper parts would have distinct weight-material illusions previously designed. The second physically conducted experiment (3DII), by its turn, would function as a control group without the material-weight illusion treatment. Finally, the third study (2D) would be done digitally through data visualizations.

All the physicalized graphics and storytelling elements would be translated to the digital version to ensure the validity of the studies. However, during the first experiment (3DI), the necessity of a fourth one arose. After collecting the 3DI memorability results, I noticed the responses to the ‘Order task’ question were diverging a lot. There were several possibilities for this unpredictable divergence. Including the question wording, for instance.

Therefore, I opted to change the parameter for encoding the weight-material illusions to tackle the reasons for this phenomenon. Originally, the weight-material illusion treatment encoded the ‘loneliness increase’ parameter. Which meant the weights varied from 1) Southern: 45g - 10%; 2) Eastern: 125g - 11%; 3) Western: 280g - 15%; to 4) Northern: 420g - 16%. Having that in mind, I hypothesized this initial treatment was responsible for the memory confusion.

Based on these initial results and observations, I discussed with my advisors the possibilities to move the research forward. The solution was considering the 3DI experiments as a pre-study where I identified and mitigated emergent problems. This decision increased the research rigor and allowed me to underline the effects of the weight-material strangeness on the participants' information recall. 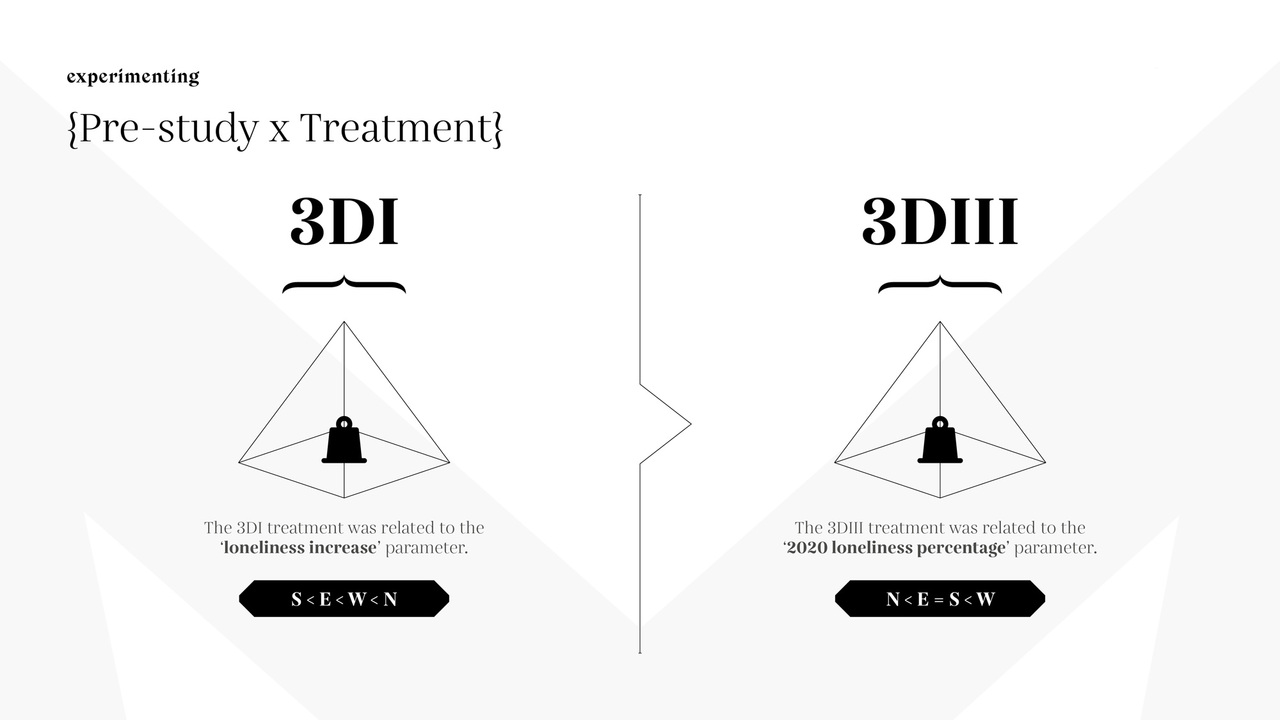 The research proceeded forward once the necessary treatment adjustments were performed. Besides this improvement, a few wordings and paragraphs were adapted to clearer the game instructions and general understanding. For example, as many volunteers were non-European, it was compulsory to contextualize the countries belonging to the EU macro-regions.

The 2D study was conducted digitally through the Miro platform during Zoom meetings. The 3DII experiment, as already said before, functioned as a control group. The upper pieces did not count with the material-weight illusion treatment, but the physicalization's interactions were led in person. 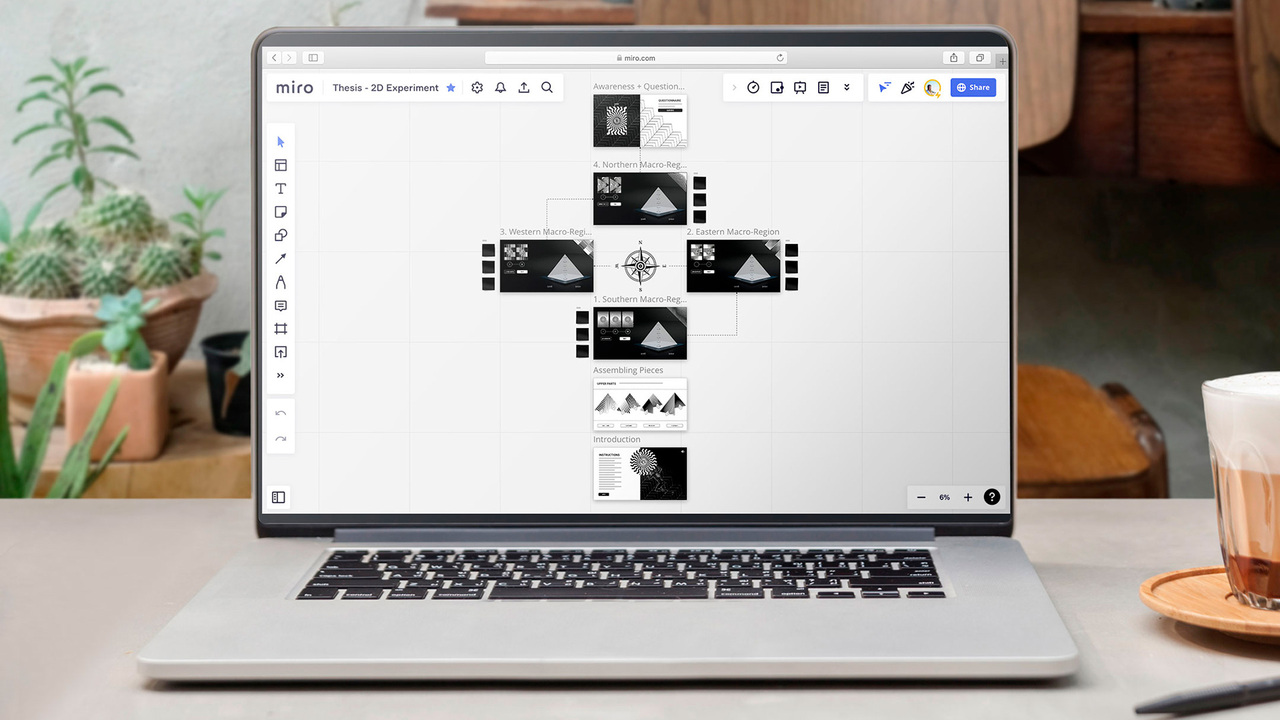 For the close-ended queries, a statistics platform (Stata 13.1) supported me in calculating percentages and mean values. The observations were translated to quantitative data because they were mostly about accurate assembly. The questionnaires' open-ended responses, by their turn, were template coded. The gameplay ones were open-coded instead. 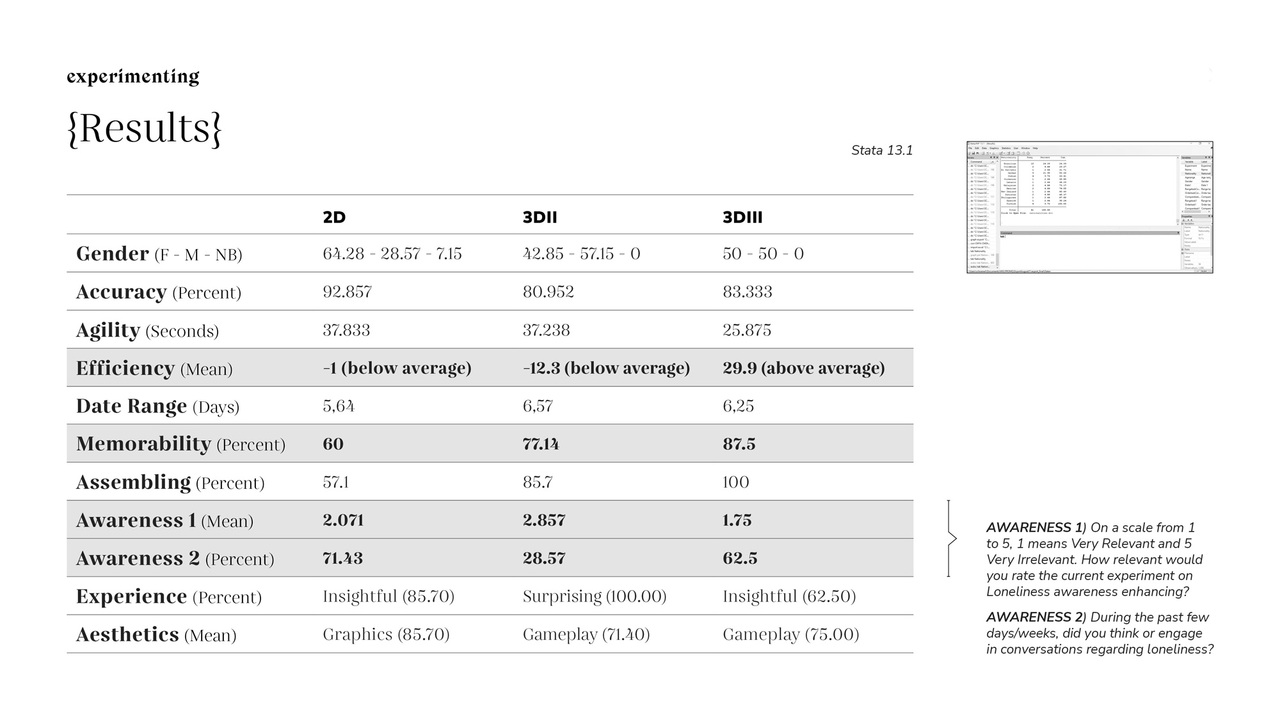 When wondering about the design future, what often comes to mind is “a homogeneous image driven by technology and the market [...] perpetuating a cycle in which designers remain dealing with consequences of the current situation, rather than causes, values, or structural elements.” (Brandalise & Eira, 2019, p.133)

This means that ‘creating futures’ through design should be more about ensuring a dignified life for humans and non-humans than maximizing profits or reducing financial costs. In this sense, the present research ultimately explored the potential of the design field in leveraging emotional consciousness through embodiment.

The strangeness and material-weight illusion effects in data physicalizations might remain inconclusive, but the design relevance in producing more appealing experiences with data became evident. Which, at the end of the day, may even sprout better ways of communicating scientific knowledge and enhance mental/emotional well-being. 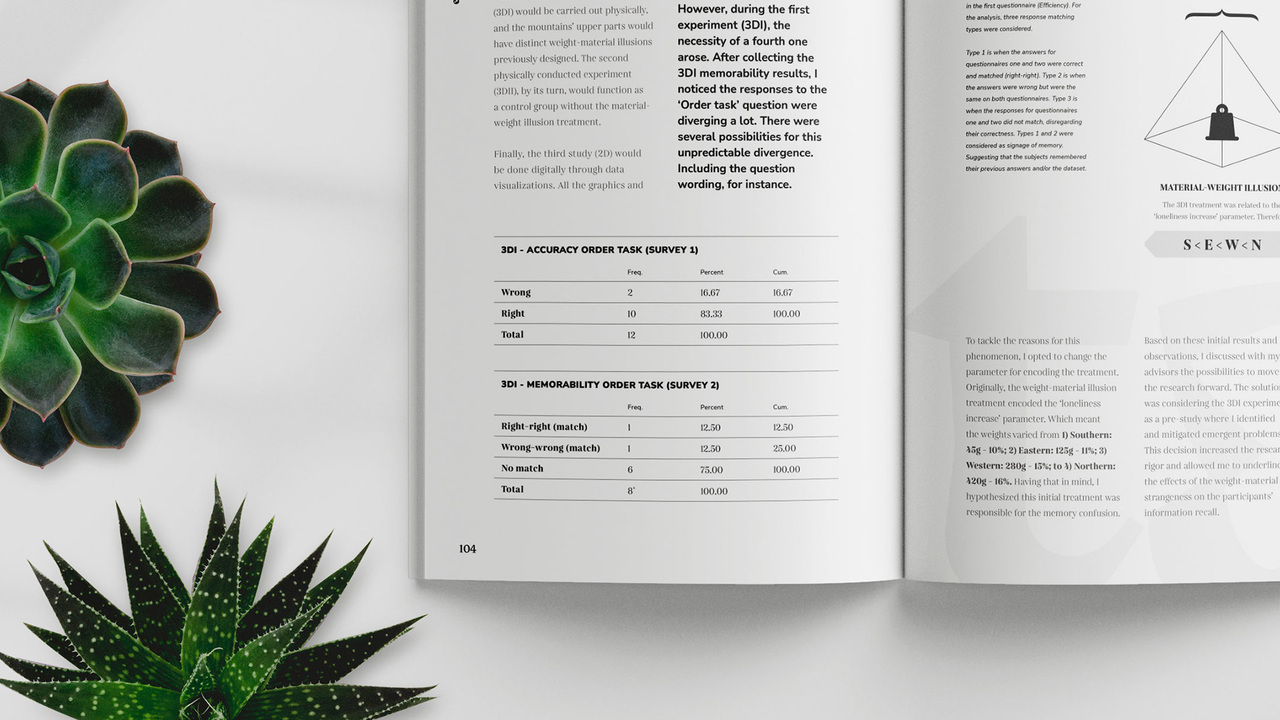 The present design research suggests data physicalization may significantly leverage people's engagement with data communication. Despite the inconclusive results related to the material-weight illusion treatment and strangeness, design decisions highly impacted all the 3D experiments' efficiency and memorability. Either beneficiating or jeopardizing them.

About data visualization, properly designed elements can highly influence the overall users' experiences, such as appealing graphics, platform's usability, meaningful interactions, storytelling, and content marketing. These informed decisions may even foster awareness regarding loneliness and its possible damages to human well-being.

In a nutshell, based on the current research findings and its theory background, appealing physicalizations and visualizations are likely to become meaningful mediums for scientific knowledge disclosure and consciousness-raising initiatives. 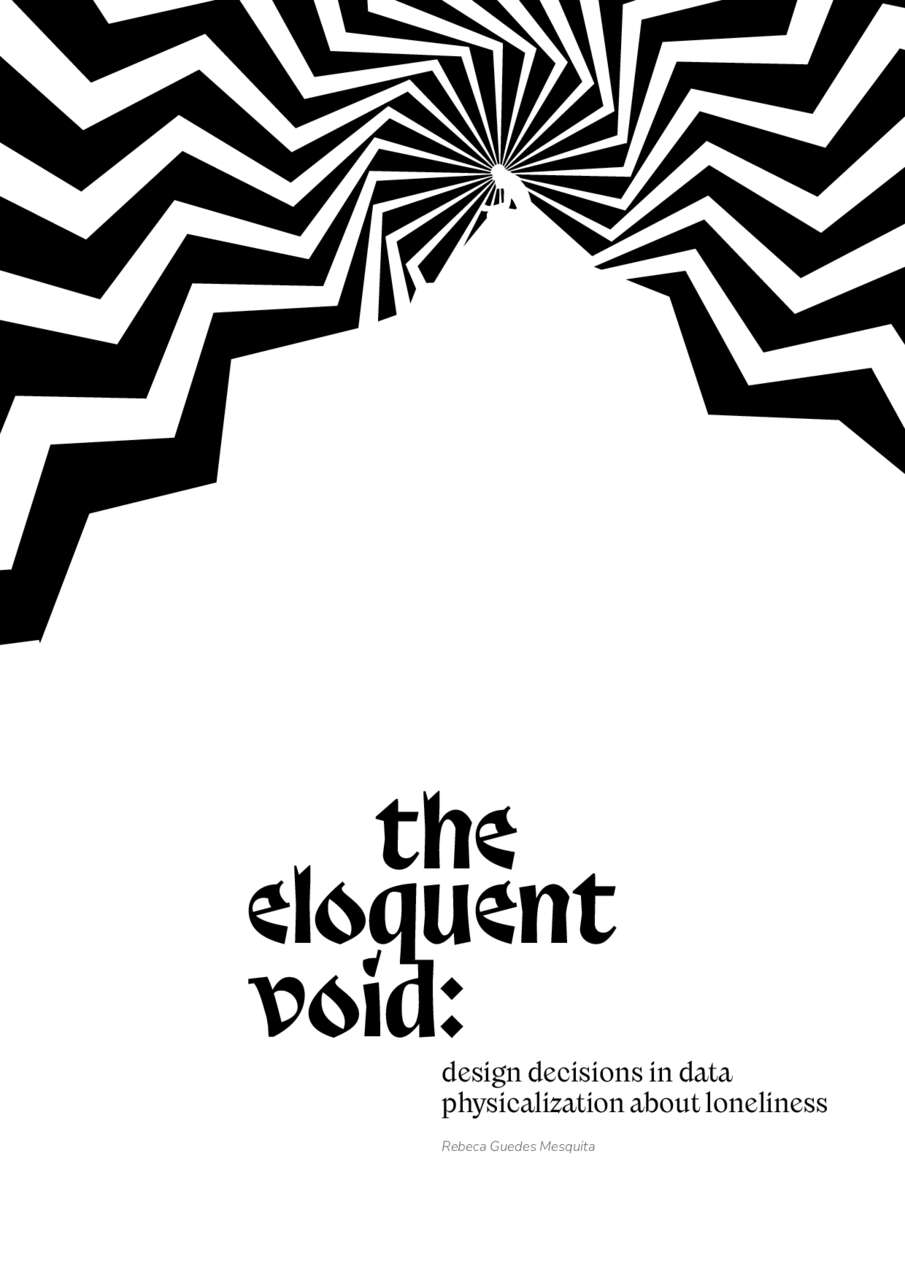