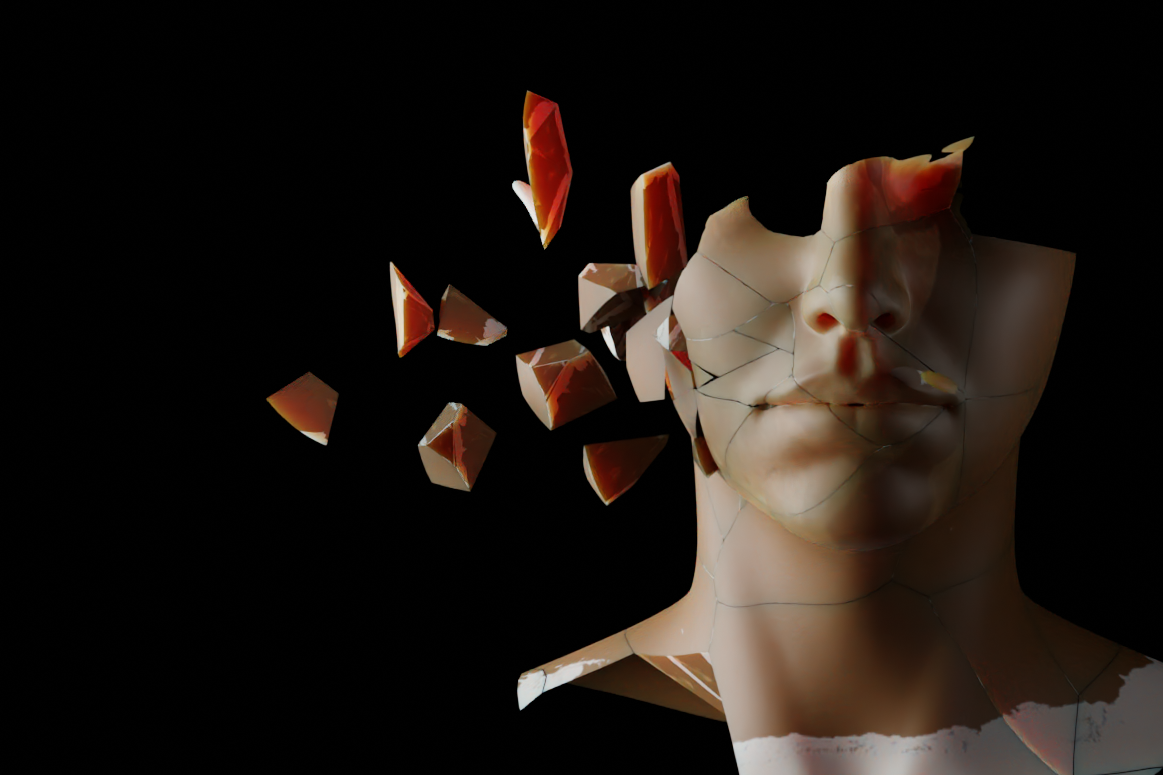 Last winter, I spent a semester abroad at Plymouth College of Art. There I had the opportunity to look into the BA(HONS) Animation for a semester. Here are a few impressions:

During my time in the Department of Animation, I was able to gain many new impressions and insights into the field of animation and see how a degree program works that have only one area as its main focus. I also had the chance to work on many smaller projects.

One of these projects, which I would like to talk about, was that I was allowed to participate in the Illuminate Festival of Lights beside my studies. 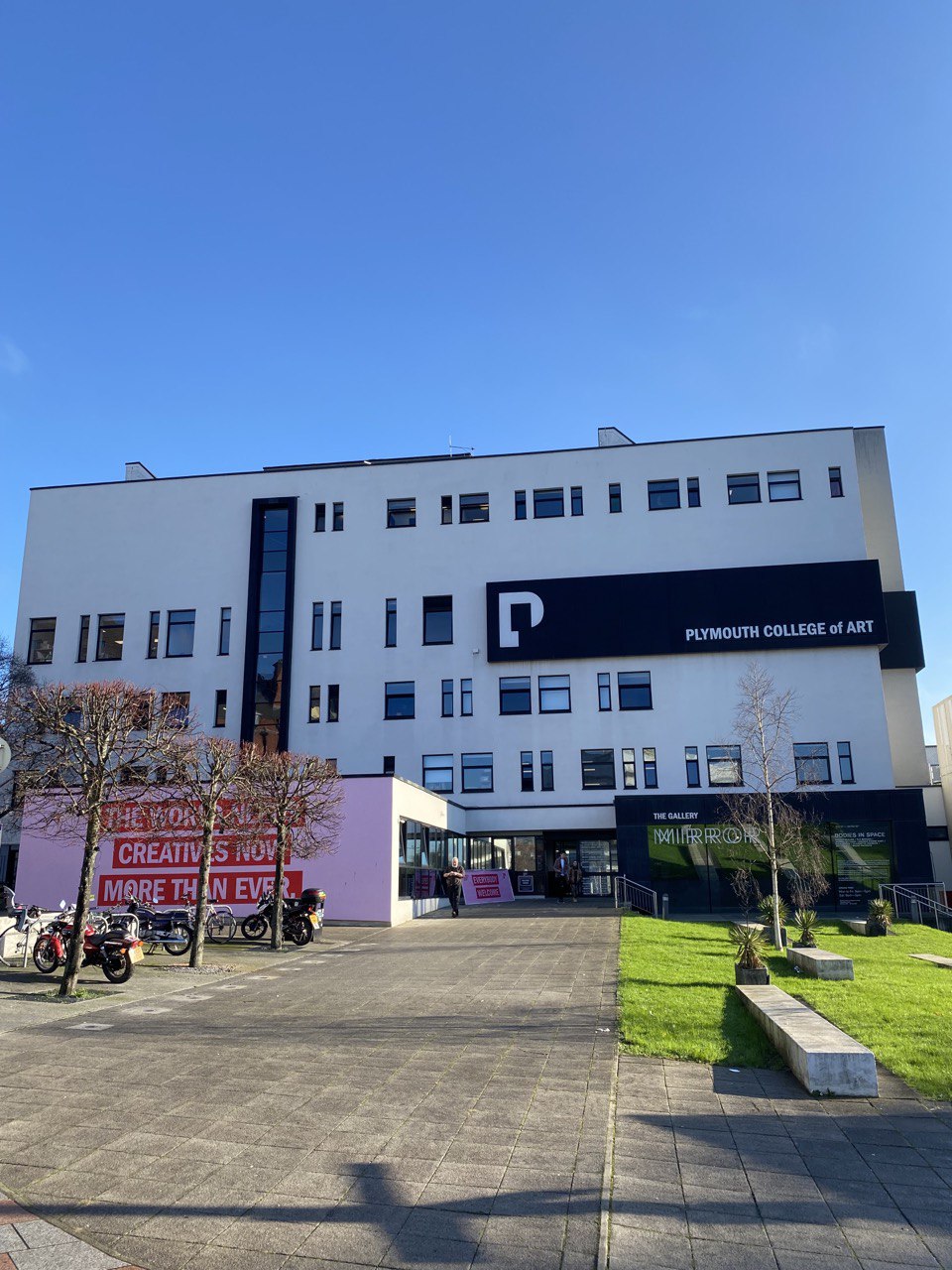 The Illuminate Light Festival is one of the largest light festivals on the south coast of England. Students had the opportunity to participate in a free call for entries, which allowed them to submit a project proposal to the organisers. Only the most convincing concepts among the students' proposals were taken. The task was to create a small, abstract animation on the topic of climate change and climate crisis, which would later be projected onto a building at the festival. Fortunately, my project proposal was accepted by the Juri, which presented me with the challenge of creating a finished animation within 8 days.

My concept/idea was to create a 3d animated face of the earth and let it react to different climatic changes, changing the shape of the head and the facial features accordingly.

The idea behind it was that most people don't really realise what they are doing to our planet with their actions. Perhaps one reason for this could be that we do not directly notice some of the consequences of our actions. But our planet is not just a rock floating through space. It‘s a living, breathing beeing. So how can we create the empathy we lack for it?

Humans react to other humans. When someone is in pain we feel a certain empathy and help them. My plan was to humanize the earth in form of a 3D modelled, female face which reacts to different climate emergencies. It freezes to ice and cracks when it's cold, it's burning or melts when it's too hot, and so on.

As the time limit of 8 days was very, very tight, I couldn't spend much time on trial and error. The result had to be convincing and expressive enough to attract attention. I therefore decided to show the head in a basic position and in 3 different „climatic states“, namely „burning“, „melting“ and „drying up“. Although there are of course many more climatic effects that could be shown, I limited myself to 3 different „states“ of the face that I was convinced could be effectively depicted in the given time frame. 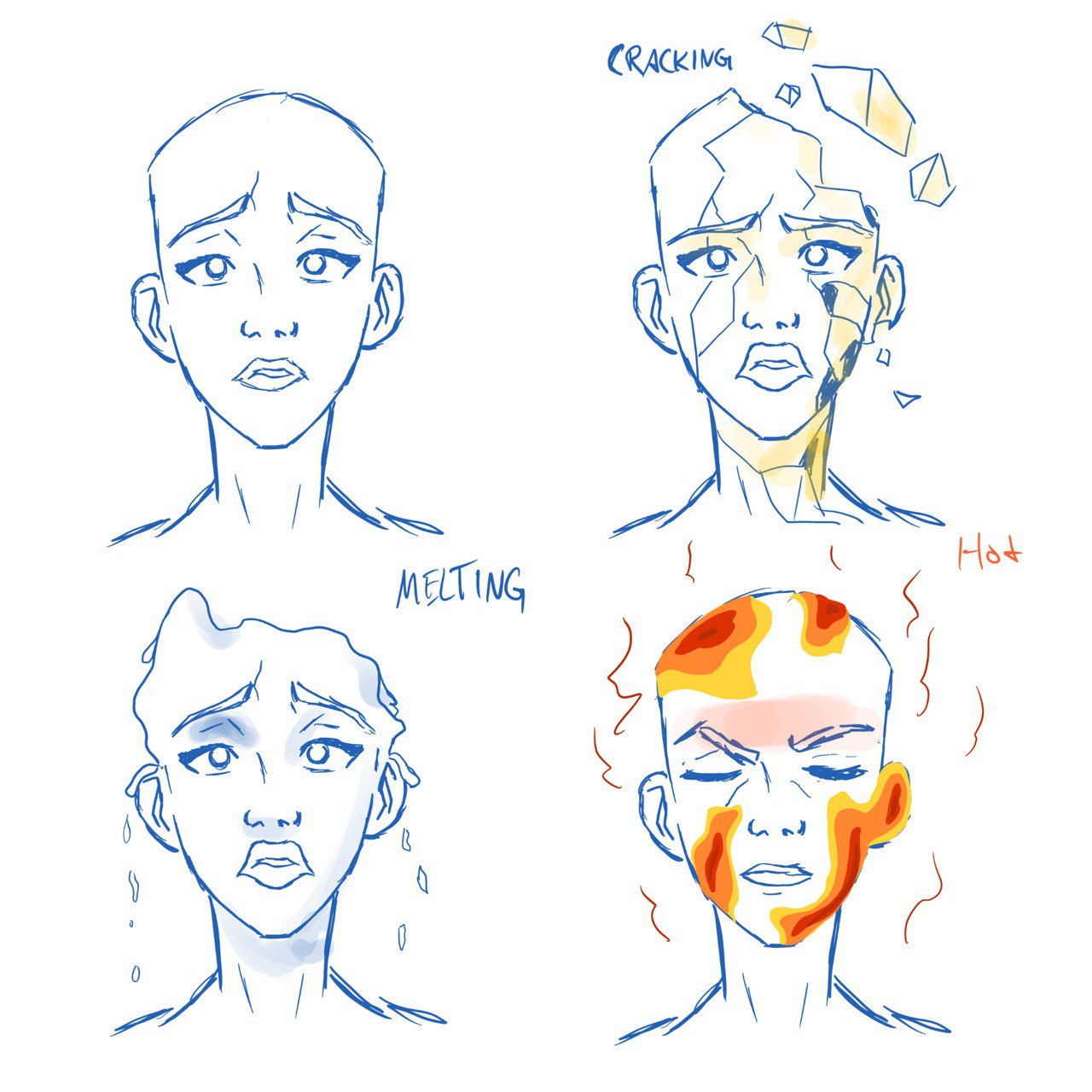 Quite early I started building different prototypes in Blender to get a feeling for the possible scenery. I quickly realised that the modifier function in Blender was a very good way to create the desired effects. Unfortunately, I significantly underestimated the amount of work I was getting myself into. Since I haven’t dived so deeply into the modifier functions before, error messages were not that rare at the beginning. However, I was able to fix them relatively quickly with the help of my lecturers and a couple of youtube tutorials (^^). 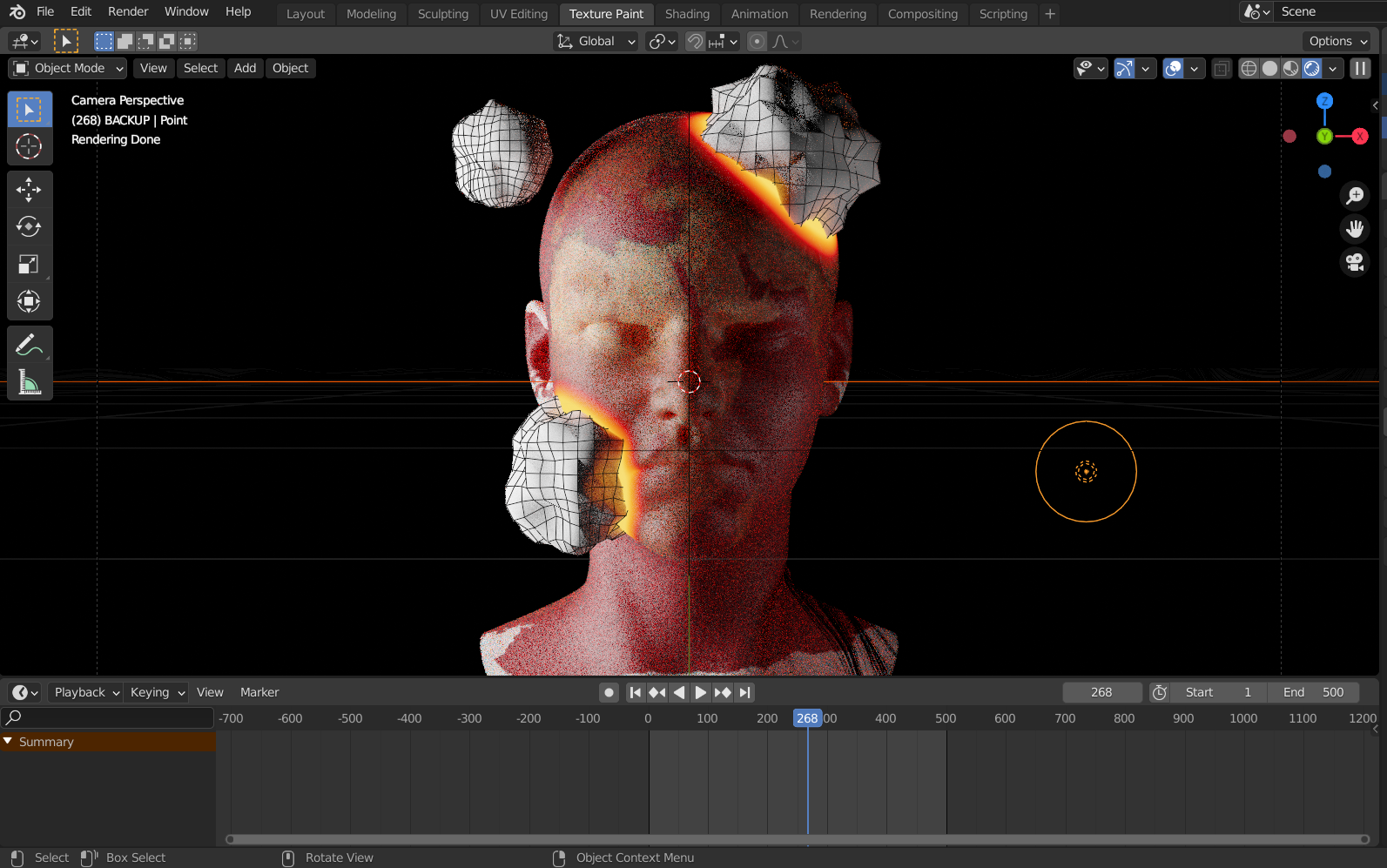 In addition to the effects and changing the facial features, I also decided to colour match the head to the scene being shown to create a more fitting image. 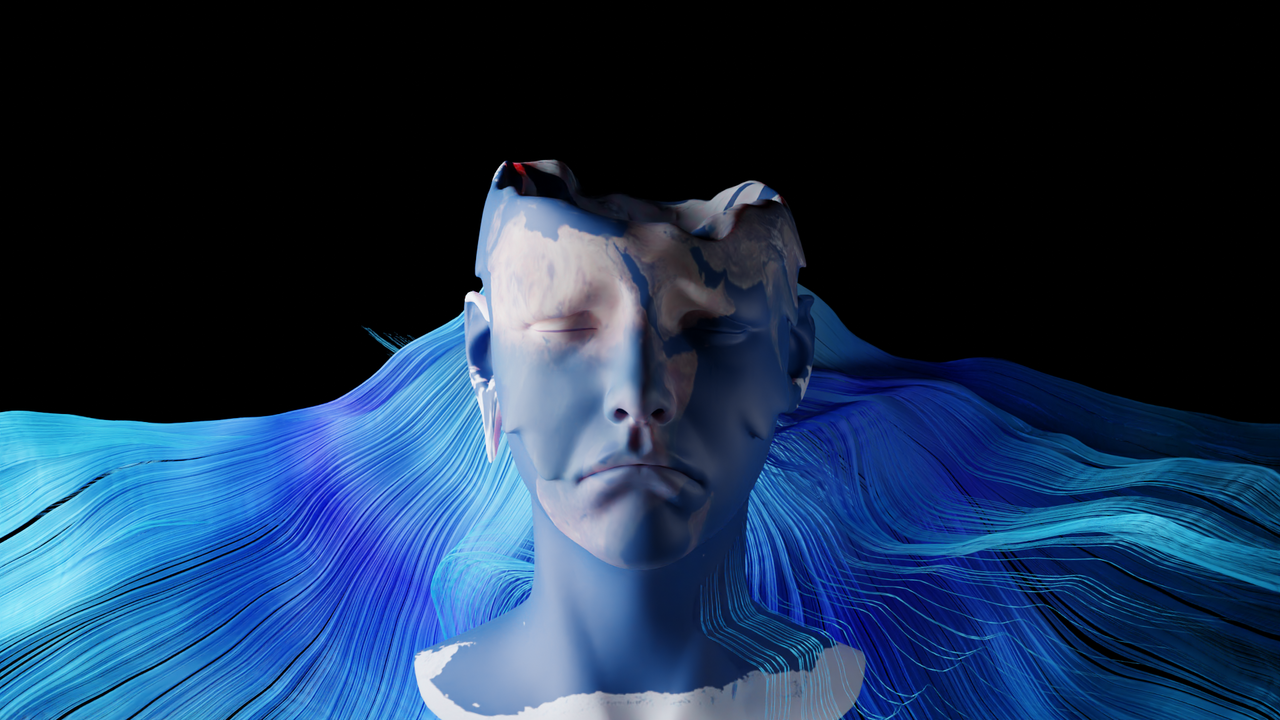 The backgrounds were one of the biggest challenges in the whole process. I wanted them to reflect the character of the scene being shown and to fit them into the overall theme in an abstract way. I therefore decided to use a Hair Particle System to create a wave-like formation in the background, which changes in movement and colour (Inspiration -> Heat Waves). I also wanted to create the movement with an animated force field. Unfortunately, with this method it turned out that the relatively detailed particle system massively increased the rendering time, which meant that a scene sometimes took hours to render. This caused me great concern due to the limited time, but my lecturer gave me a few good tips, which I was able to use to get the problem under control. 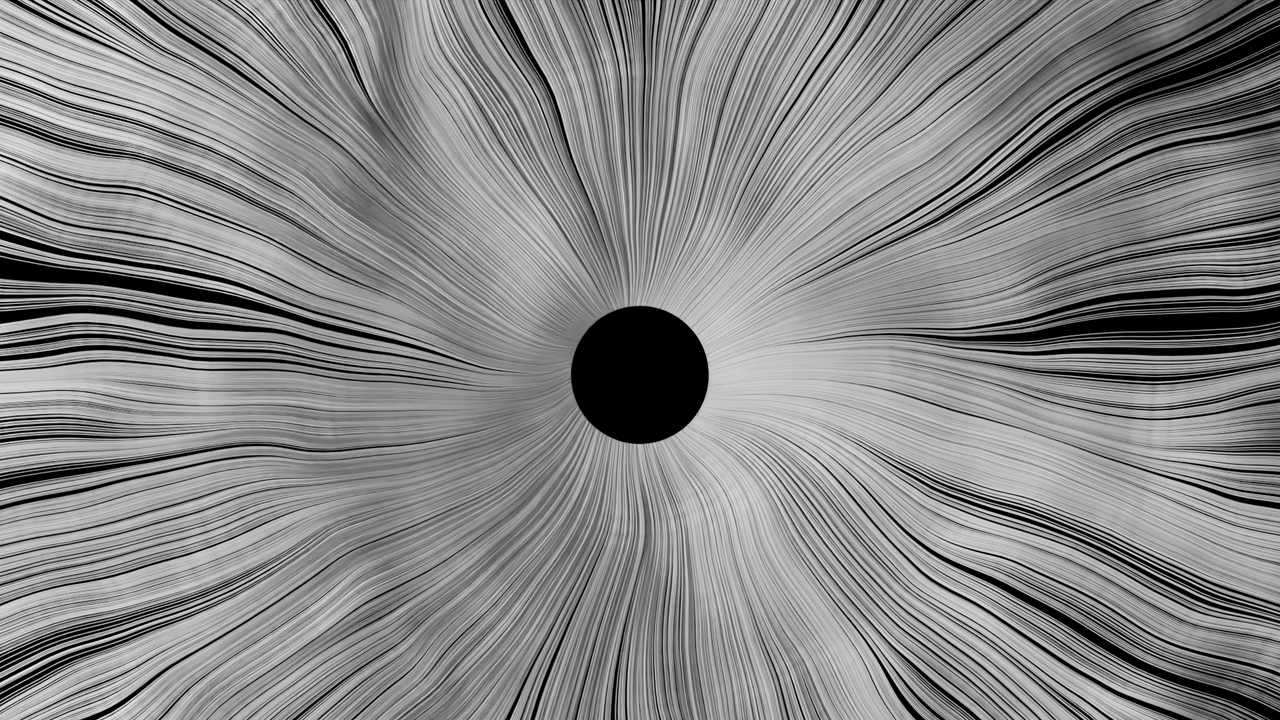 For the final renders I decided to render the background and the head on several PCs to save quite some time and then merge them in After Effects. The final animation was very well received by the Juri and was shown, along with other student work, at the festival.

Of course I wish I had more time for the animation, but I am happy with the overall result and really thankful for the opportunity. 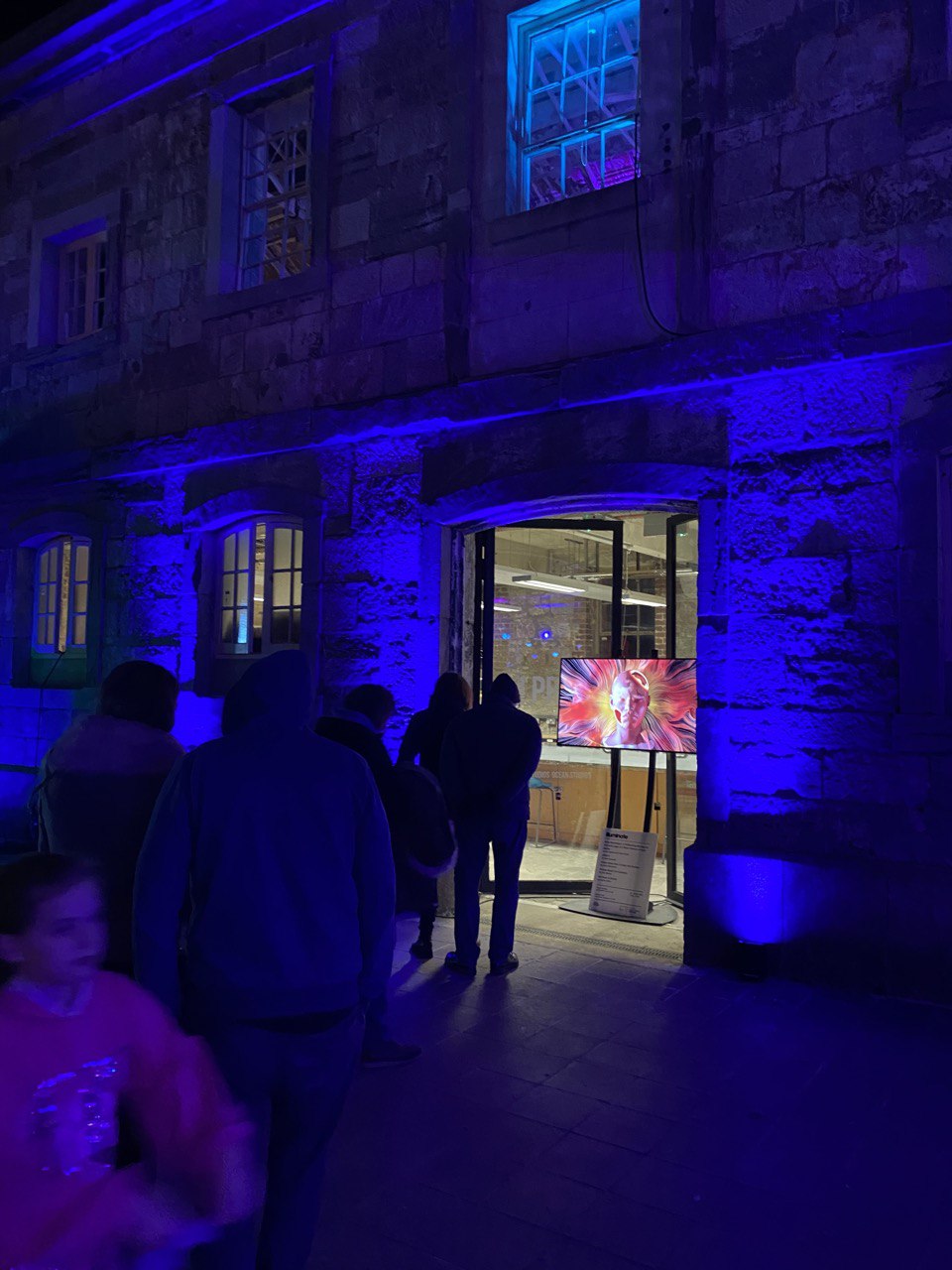