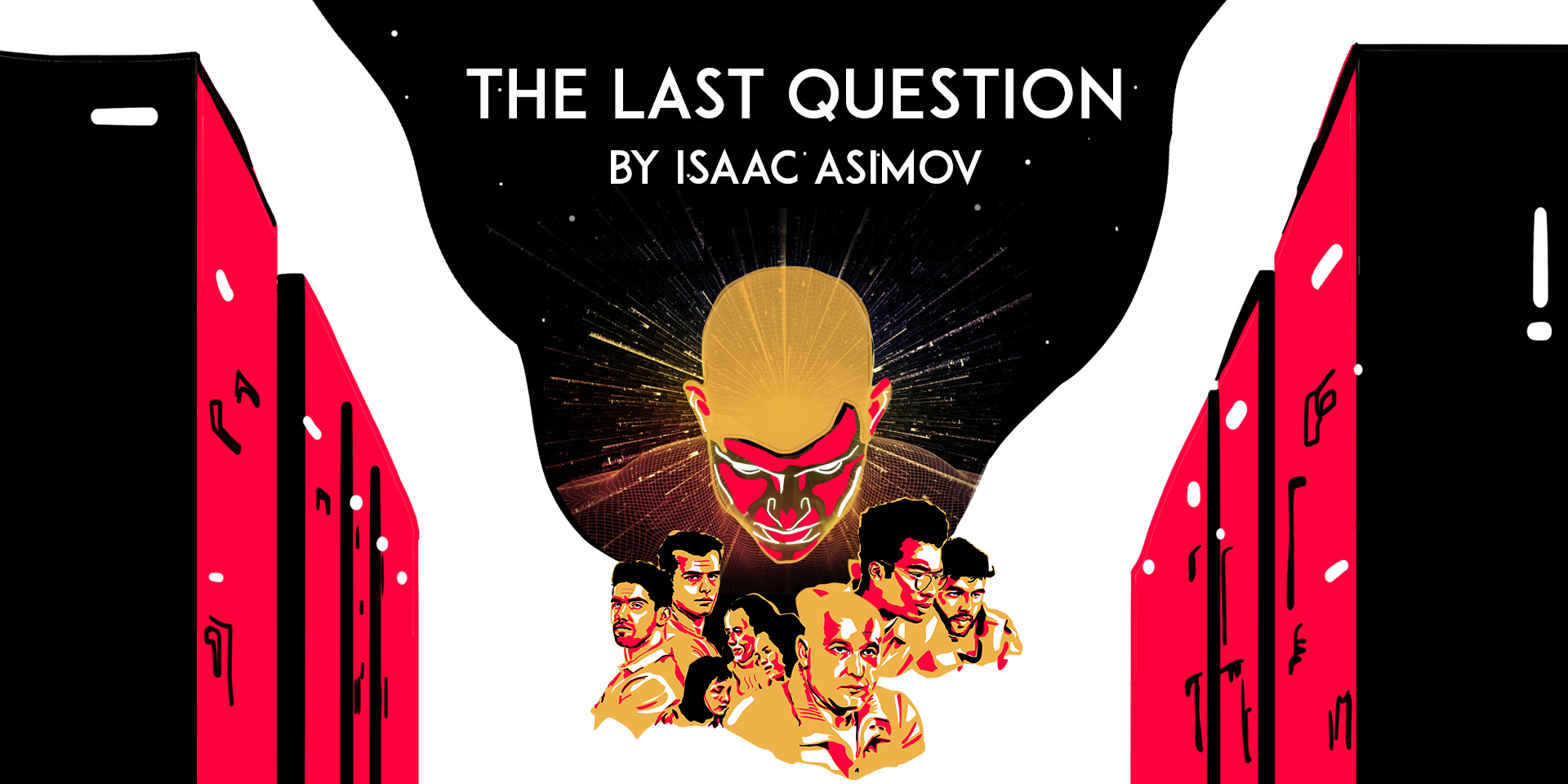 This project was focused on storytelling in the realm of Sci-Fi genre. The requirement was to read a Sci-Fi short story, understand its plot line and plot points, analyse the characters and create a visual story arc. The task was then to hack this story by introducing new plot points and an artifact to shift the flow of the story for a new ending. We explored different types of Sci-Fi categories in storytelling for e.g. Utopia, Dystopia, Cyberpunk, Robots, Near future, etc. and used this knowledge to hack the story.

This project combined both 2D and 3D design for the final outcome. After developing a hacked plot line and the artifact, we created posters for our new stories and then worked on 3D models of our artifacts.

Premise of the Story

Universal scale computers have emerged and over long intervals of time humans ask these computers the same question 'How may entropy be reversed?' 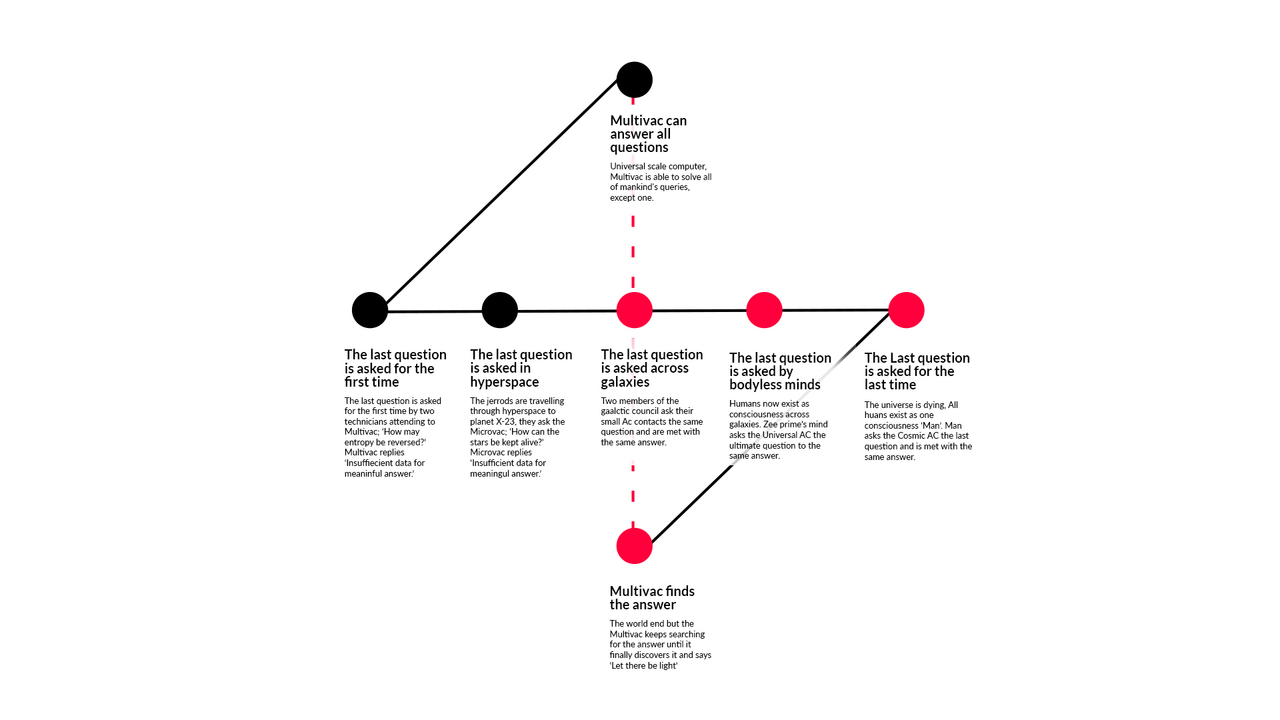 This story is a reflection of humanity's quest to survival and our fear of the end of the world.

Multivac is an all knowing Super computer which has allowed Earth to store sun's energy to fuel all its power. It can answer all of mankind's problems and questions except one.

The last question was asked for the first time in 2061 by two technicians to the Multivac. The question was 'How may entropy be reversed?'. The Multivac replied 'There is yet insufficient data for meaningful answer'. The same questions was asked again through 6 long intervals of time and each time Multivac and its descendants failed to reply, until the very end as the universe is dead and Multivac find the solution. It says 'Let there be light' and then there was light. 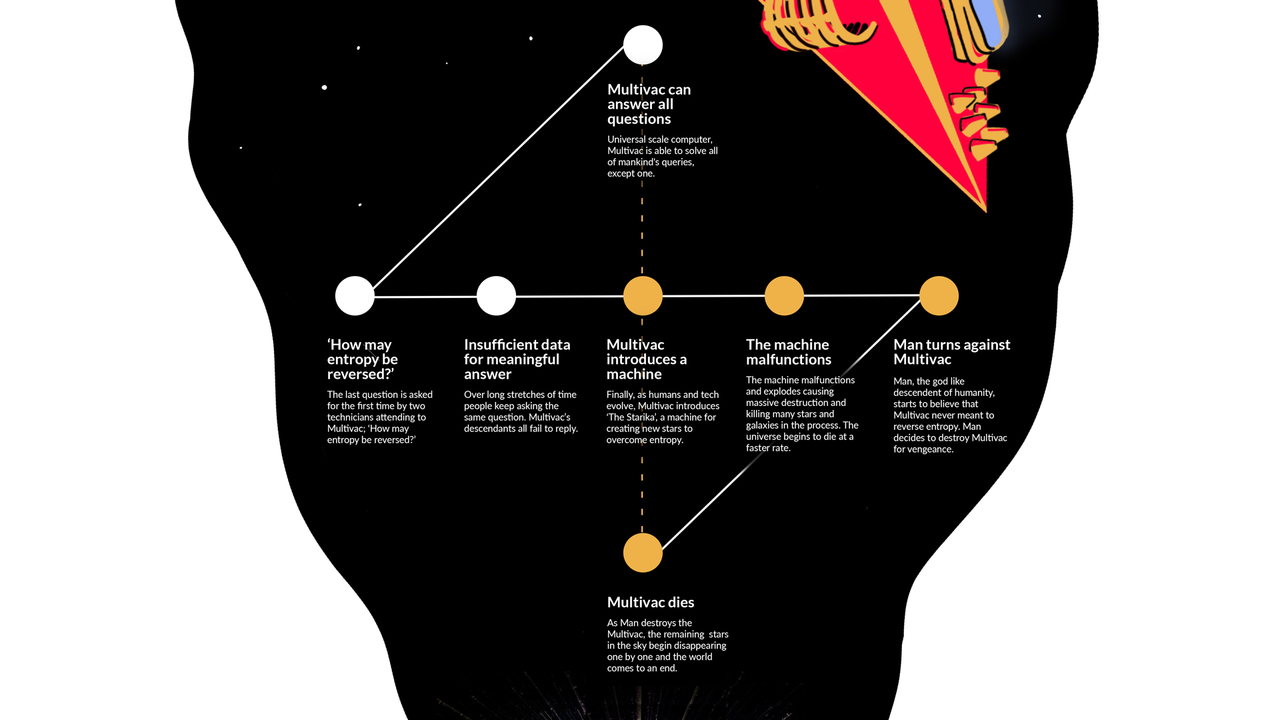 Finally, humans evolve to a state where they exist as consciousness across galaxies and Multivac has become more powerful than ever allowing hyperspace travels and inhabitation of galaxies. but the universe is slowly ending and the stars are dying. Multivac introduces a machine called 'The Starika' which will create new stars and sustain the universe.

But this machine malfunctions due to extreme gas pressure and causes a lot of damage of stars and gaalxies in the universe. This causes the 'Man'; god-like descendant of humanity, to distrust Multivac. Man stars believing that Multivac had been sabotaging their chance at saving the universe and decides to destroy the Multivac for vengeance.

As Man kills the Multivac, the stars in the sky starts disappearing one by on and the world comes to an end. 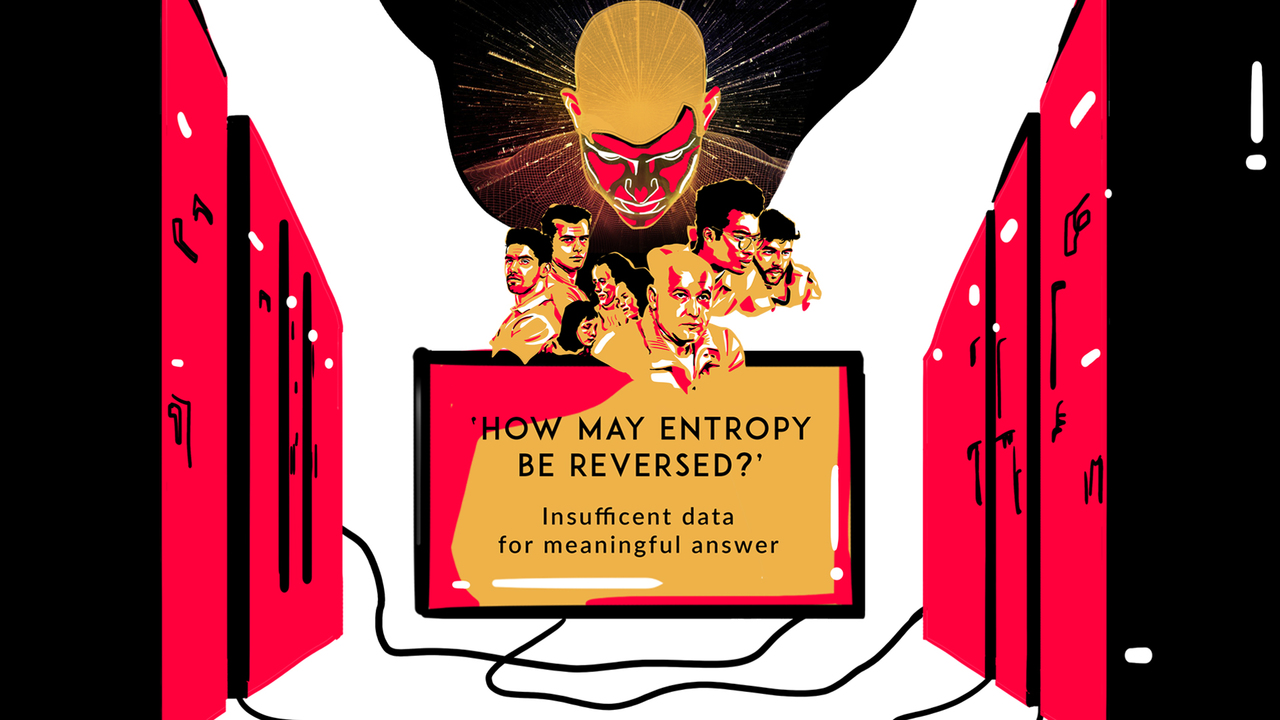 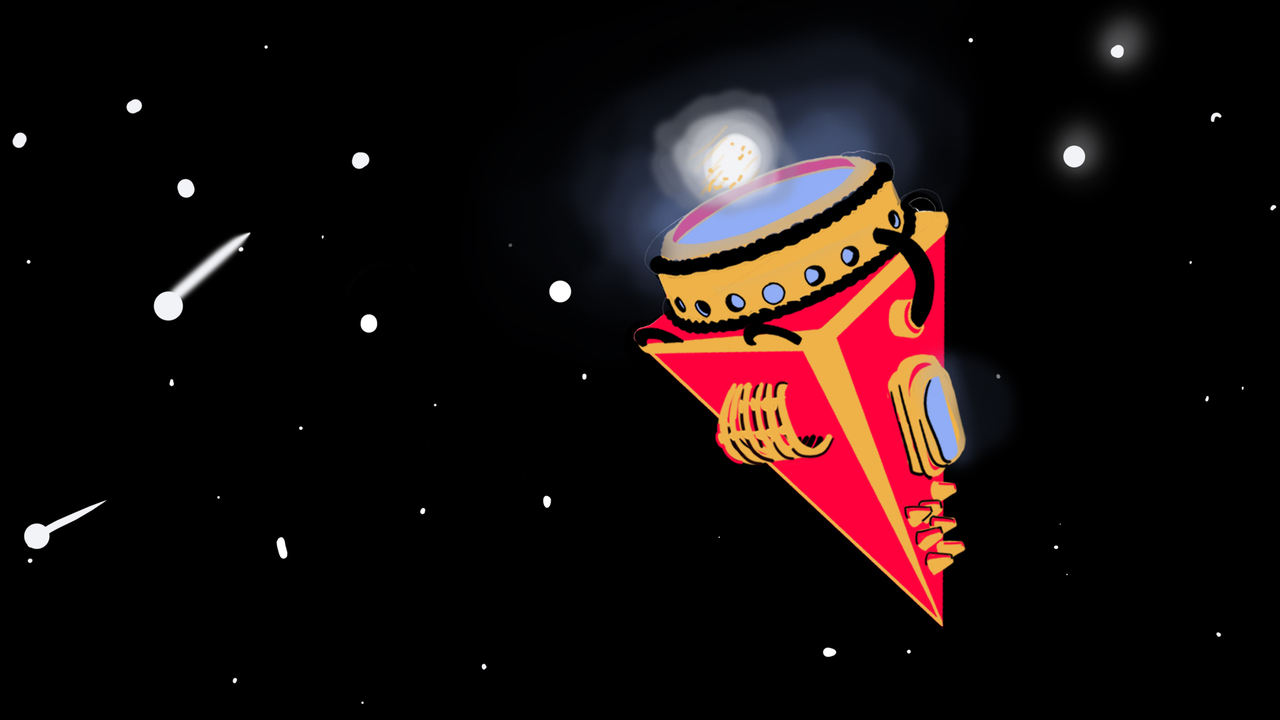 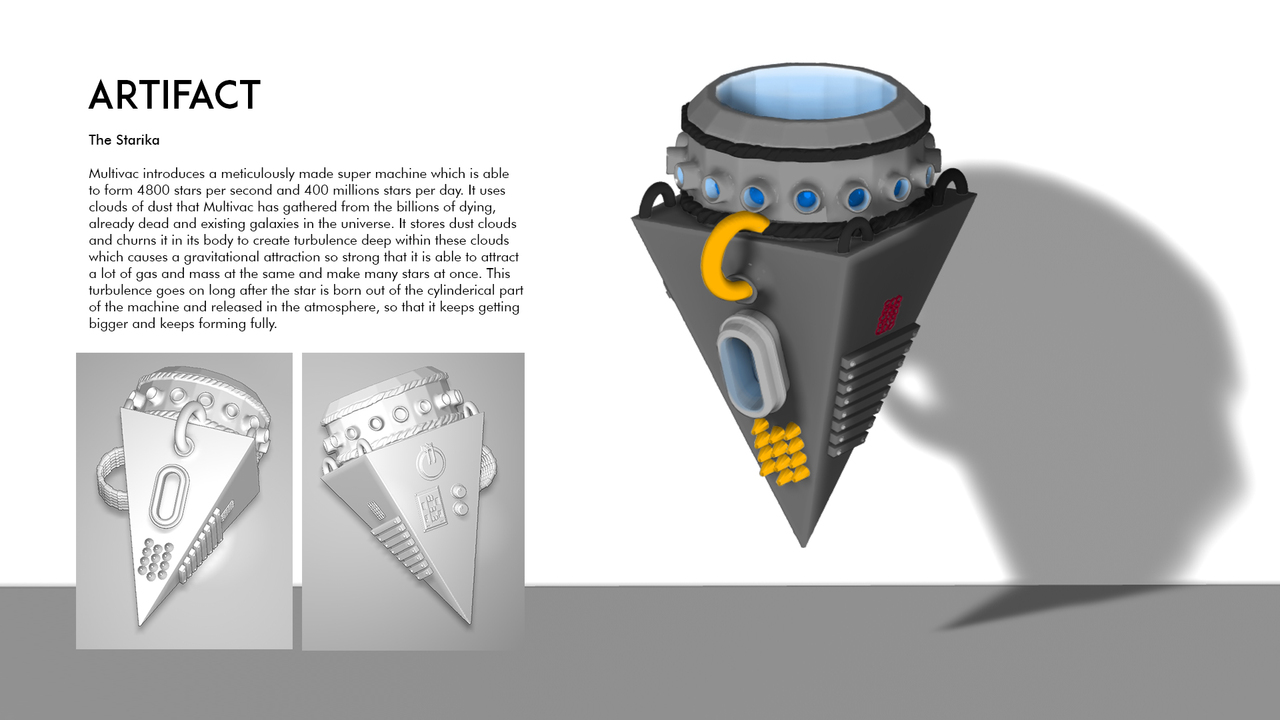 Multivac introduces a meticulously made super machine which is able to form 4800 stars per second and 400 millions stars per day. It uses clouds of dust that Multivac has gathered from the billions of dying, already dead and existing galaxies in the universe. It stores dust clouds and churns it in its body to create turbulence deep within these clouds which causes a gravitational attraction so strong that it is able to attract a lot of gas and mass at the same and make many stars at once. This turbulence goes on long after the star is born out of the cylindrical part of the machine and released in the atmosphere, so that it keeps getting bigger and keeps forming fully.

The Starika is suspended in space, it's triangular body allows it to travel through space at high speed. It is a large structure, roughly the size of a spacecraft. It has pipes and vents to allow passage of gas and dust cloud inside and out of the machine. The buttons and dials allow to adjust the settings on the machine. 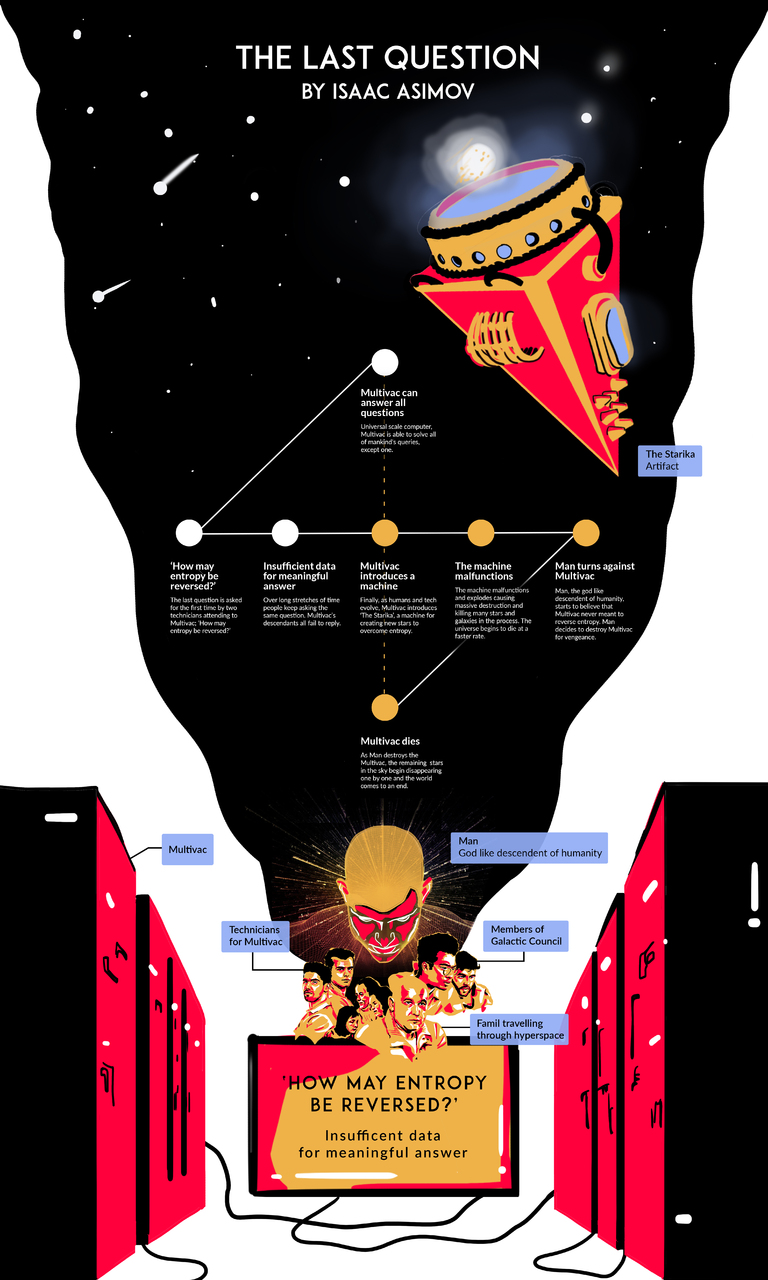