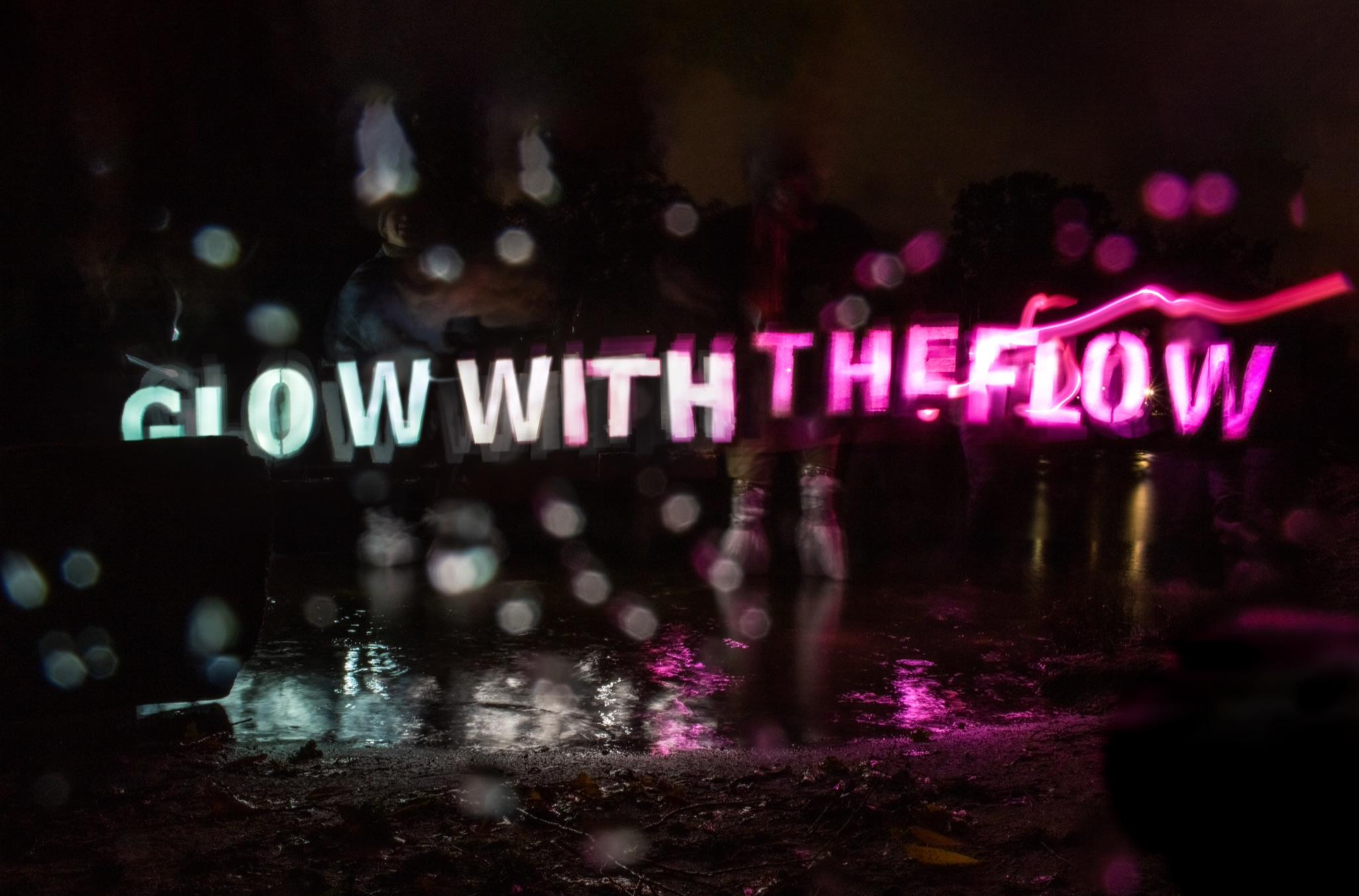 For light and typography lovers who love to experiment and to conquer the city. Summer is over! It’s getting colder, more uncomfortable and it’s getting dark early. It’s time to bring some light and love to the city – let it glow. 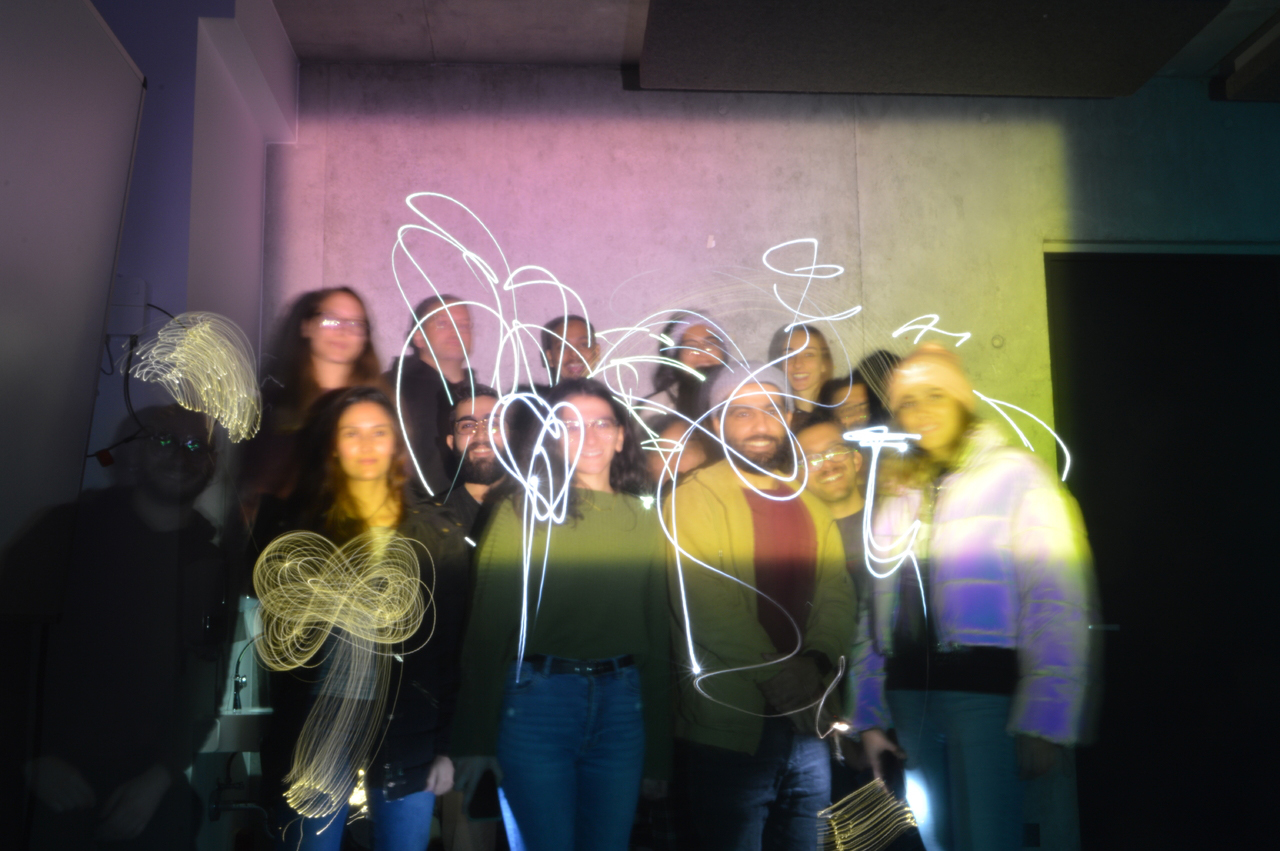 We explored how to write with light and long exposure. It was less about writing freehand with a mobile phone flashlight, but rather about thinking about a strategy with an experimental and improvised light installation to create a typographical love message as a hologram in downtown Dessau. The choice of the stage, setting and the strategy depended on what the students love on the Bauhaus City. 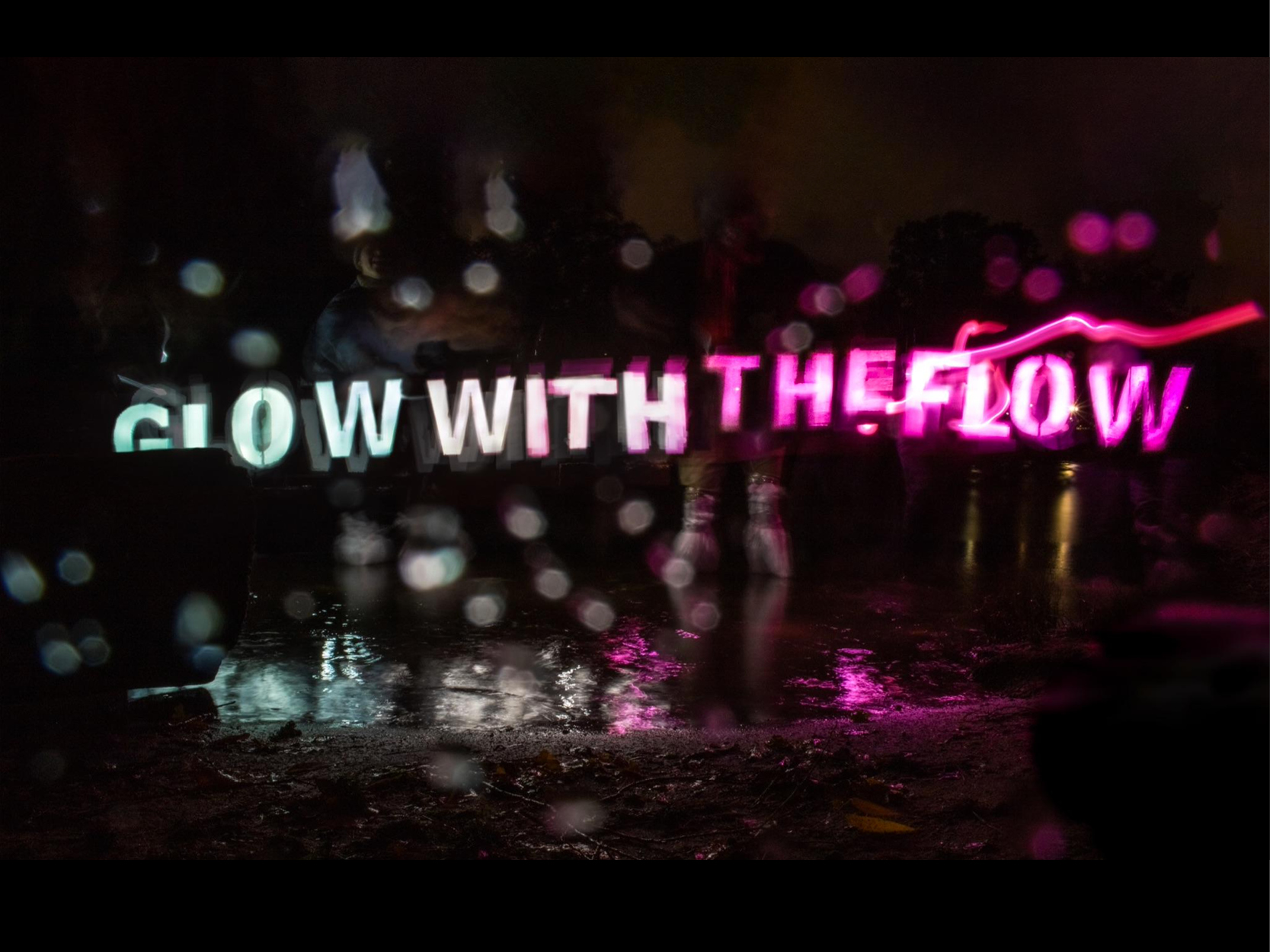 Glow with the flow

The Schillerteich at Schiller Park was the first location in Dessau that came close to fulfilling our longing for the sight of water, which stems from being constantly surrounded by rivers and beaches back home. It was the perfect location to stage our love message ‘Glow with the flow’ as it relfects on the lake, reminding people of the magical things that can happen if we let love flow through us and the glow that those in love project on their environment. Cutout cardboard stencils were covered with vellum paper to disperse the light and equally illuminate each letter, producing clear characters and a homogenous reflection in the water. This idea came from several experiments with screens, aluminum foil, and reflective surfaces. The font chosen was a Sans Serif typeface known as ‘Bell Centennial’. Much like the ink traps’ behaviour in each character, this design helped further sharpen the edges of our message. Layers of depth were created by steadily moving the stencils as we outlined the letters in light to form a 3-dimentional effect, and a change of color mid phrase, so that the colors overlapped in the word ‘with’ achieving a smooth gradient from cold to warm light. Our final chosen shot is overlaid with light flares from rain drops, lots of love, and most importantly, glowing with the flow! – Judy Elkhatib and Ali Tohme 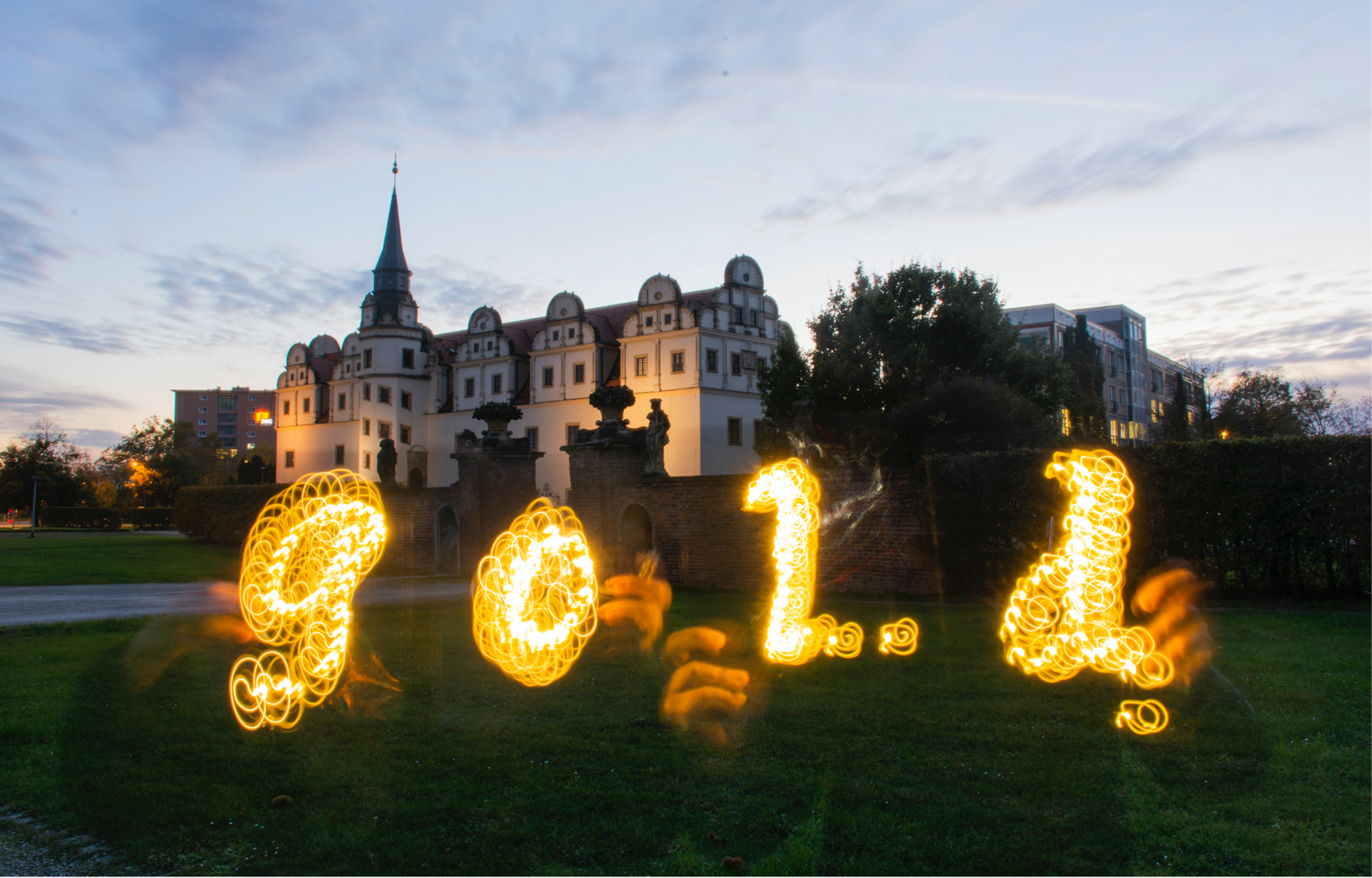 The aim of this project was to experiment with the vast possibilities we have combining photography, typography and lighting to convey a message that expresses Dessau and its finest way.

We started the project by making an exploration around the city to find the best location possible to show Dessau’s value. This is why we chose der Johannbau / Rezidenzschloss Dessau which was one of the first renaissance buildings in middle of Germany.

To show Dessau as a hidden treasure, we decided to go with the idea of using the word “GOLD”. After selecting the location and forming the message, we explored several techniques which are iPad Screen, candles, and Christmas lights. To highlight our message “GOLD”, we decided to present our letters as gold coins and to do so, we made circular movements while taking a long exposure picture with the Christmas lights and iPad Screen.

The aim of the composition was to emphasize that der Johannbau is a great representation of the historical and cultural meaning of Dessau. By positioning the message in front of the castle, we intended to show that there are many things to explore in the city and the starting point may be the castle. The process and the outcome of the project is presented below. – Laura Esperanza Ochoa Delgado, Rafael Alejandro Muñoz and Sezen Yüksel 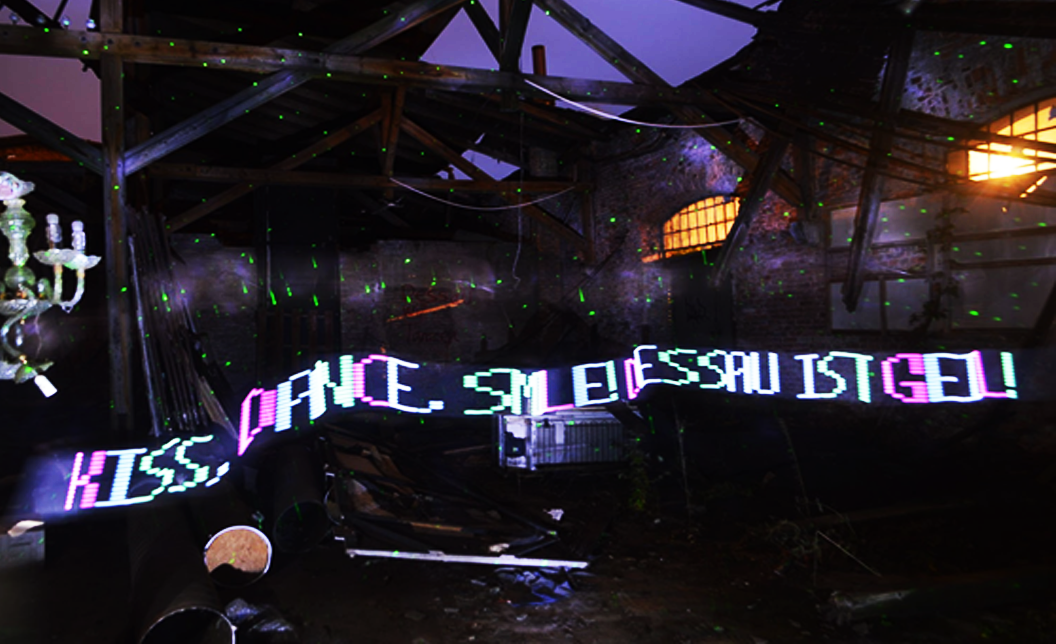 We started the process by gathering insights from graffitti and social media reviews of the BEATCLUB to create a sentence. After understanding the main theme we decided on KISS, DANCE, SMILE! DESSAU IST GEIL! For the lights, we experimented with Arduino LEDs as a source. Parallely we achieved the same idea on video using an iPad, due to time constraints. The sentence was reduced to single characters thereby creating unique typography. The video was timed in accordance with the time dedicated for the long exposure shot. We brought an LED strip, a starry sky projector, the coded arduino and the Ipad to the site. As the Arduino speed was not fast enough to be captured on camera we decided to pursue the Ipad format. We posed in different ways and used the light strip to draw outlines of our bodies. We captured multiple images from unique perspectives and merged some nice shots to develop the final image. We were able to reveal the hidden beauty of this abandoned building and the stories it told by temporarily transforming this ‘non-place’ into a ‘place’. With lights and photography, we portrayed the verve of and reminisced about the now-closed BEATCLUB. – Klaus Dietz, Shruti Kaul and Diana Paola Olarte Franco 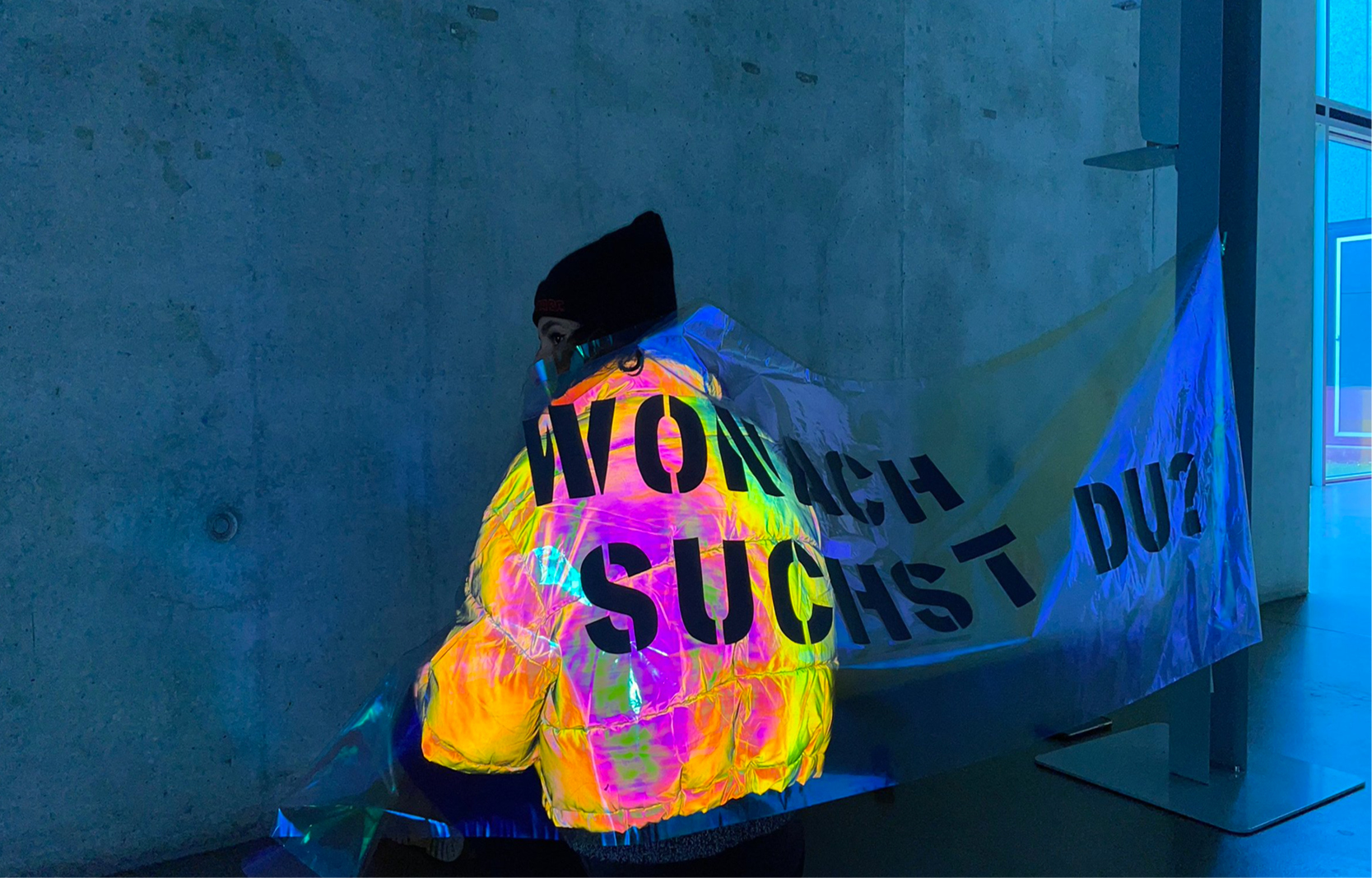 Wonach Suchst Du? What are you searching for?

That open question, can lead to many answers, from desires to needs to beliefs to goals. One might want to visit for a change. Some people want a new start on a new chapter in a new country. Some people want to change their routine, their life, etc. Because each of our group members is in Dessau for different reasons and tries to answer this question. This is exactly the big and profound question we wanted to capture in our series.

Since this is versatile, we decided on a special detail in the photos: a holographic foil should be the focal point and recognition value. No photo is like the other, just as everyone answers the question „Wonach suchst du?“ differently. This is another reason why the result was a series of experiments with the question rather than a single photo. It was especially fun to capture the many variations of lights, colors and reflections, giving the question yet another stage. 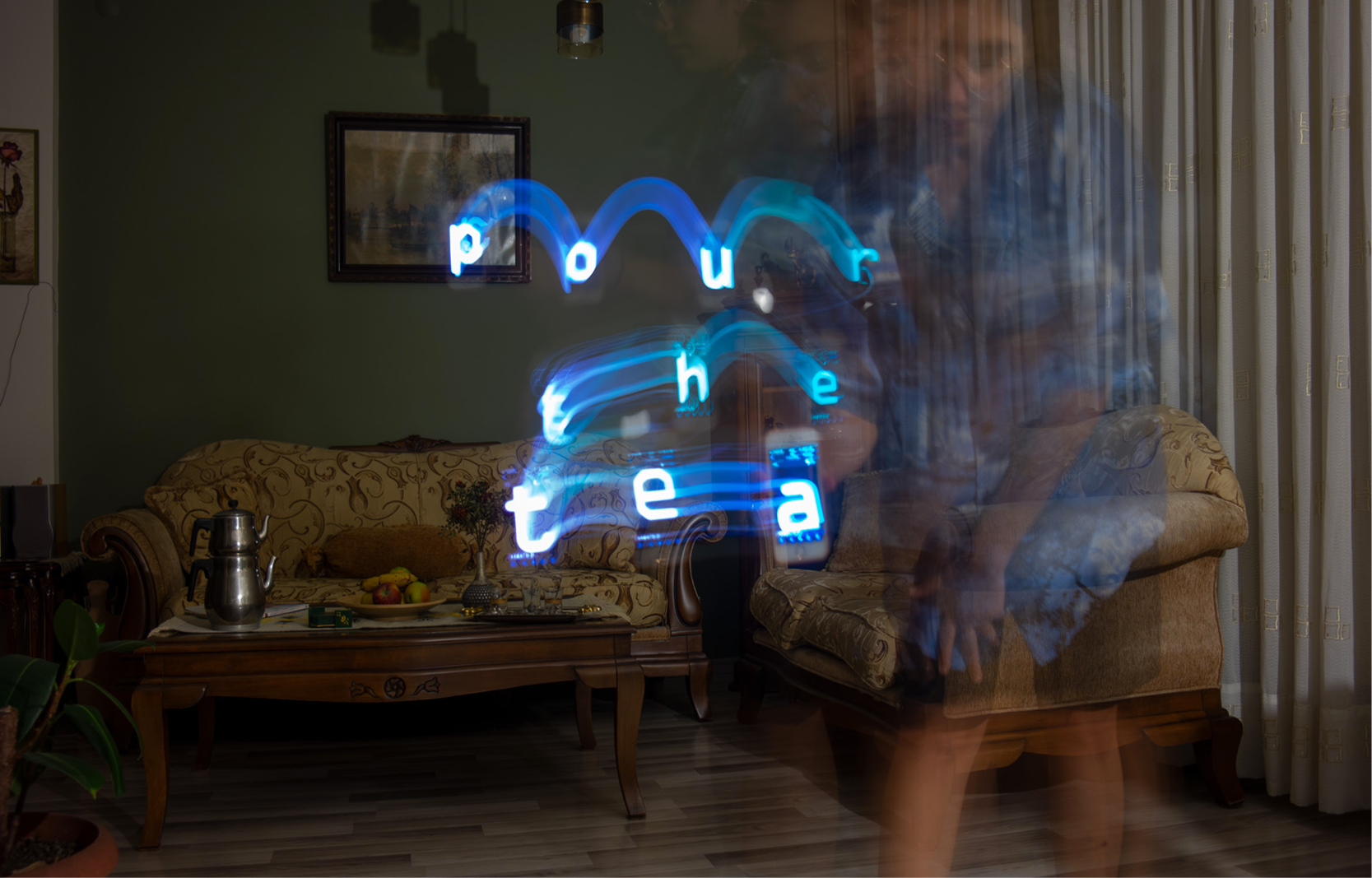 Istanbul is a fascinating city, but there is a price to live in such a big, noisy, crowded, stressful, sometimes dangerous place. The best thing about being in Istanbul is having the chance to have a cozy family home in the middle of the hustle and bustle, where you feel like you're slowing down. One of the other elements that make home warm is our way of life that likes to share. This project is about loving city life from the inside with relation to family tradition, values and relationships. The semi-traditional family home is ready to host and serve guests with a warm atmosphere. The scenario came up with keywords, considered based on conversations. In this scenario, the grandmother of the house tells the youngest to offer treats for guests: “pour the tea”, “bring the baklava”.

An iPhone is used as the light source. With the “OCR A Std” font, letters are displayed on the phone which are animated as a video in Photoshop. Each letter has 1.5 sec. between and the displayed color of the letter is white on the black background. – Serena Durmazgüler 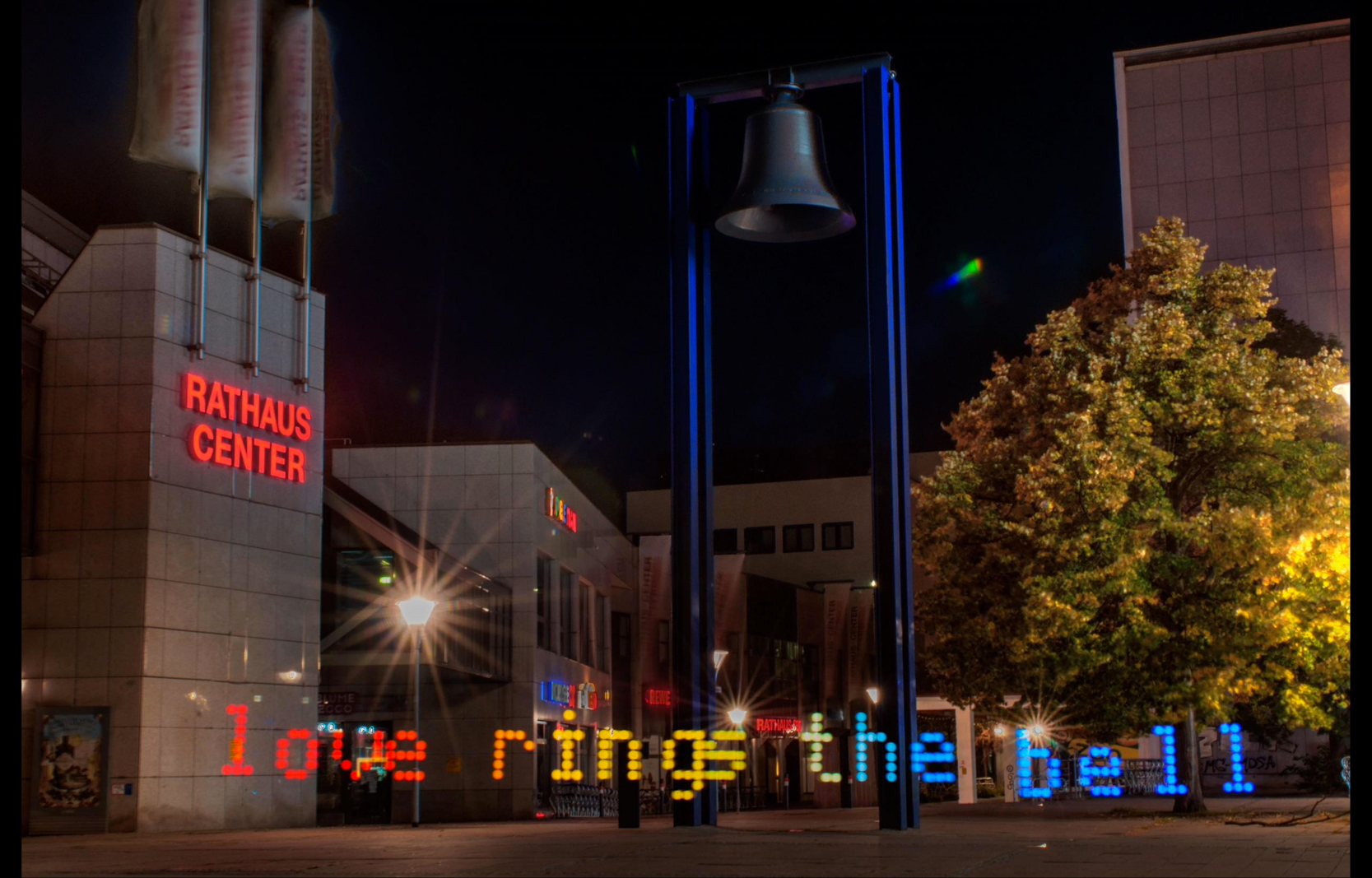 History: In 1990, the people of Dessau decided to destroy the weapons of the WORKER’S COMBAT GROUPS. Four tons of steel from the weapons were melted to cast the Bell for Peace and Freedom, a memorial to the peaceful revolution of 1989 in the GDR.

When you are in love it rings a bell and you know it. Sometimes you fall in love with a city, its vibe, and the spirit of peace and harmony. The giant bell in Dessau rings with love to welcome everyone, and remind the people about peace, unity, and freedom it offers.

We used long exposure photography and basic animation of colorful letters that were developed to draw the message with a laptop screen and used beep sound to measure the time between the letters animation. We played the letter sequence in the dark to capture the flowing expression for our message through light and camera. Multiple exposures with different settings created the final result. – Mehrbod Pakbaz, Muhammad Moazzam and Ali Naemaei